Following on from the recent sad news regarding the demise of Blackpool Centenary car 646, it is pleasing to be able to write some really good news about one of its sisters. One of the surviving Centenary cars has now been repainted in green and cream, restoring these colours to a tram of this type following a lengthy absence. However, the tram which has received a repaint is not Blackpool Transport’s own 648 – which was widely expected to be the next of the class to receive any attention – but car 643, now residing at Broadwater Caravan Park.

643 spent its last few years of service in a drab black livery with plain white ends, left over from its final advertising livery. However, following some attention by its new owners, it now looks by far the best of all the Centenary cars! The tram has been repainted in a mainly cream livery complete with thick green bands both above and below its windows. This appears to be inspired by the original livery applied to the Coronation cars when new in the 1950s, but what on paper sounds like a bizarre idea actually suits the shape of a rebuilt Centenary car remarkably well. In particular, the green stripe above the windows makes good use of the roof advert panels which were added to the roof sides when 643 was last refurbished in 2002. The repaint is not quite complete at the time of writing; the car has been repainted cream, but the green embellishments have only been completed on one side, although this should soon change. Only the black pantograph tower remains for now as a reminder of its previous appearance.

The new look 643 has already received considerable praise, with several enthusiasts commenting that it looks better now than it did at any time during its operating career, and even that it wouldn’t look out of place running on Blackpool Transport’s heritage service! Remarkably, this is the first time that any Centenary car has worn green & cream paint since 1996, when pioneer car 641 sacrificed its corporate colours to a multicoloured advertising livery for Pricebusters’ indoor market. For 643 itself the repaint is even more noteworthy; the tram was the first of its kind to receive an all-over advert when it was chosen to promote Regal King Size cigarettes way back in 1990, and it never regained fleet livery until now.

More good news is that 648 is also expected to receive a green and cream repaint shortly, ahead of an expected return to use on the revamped heritage tram tours later this year. This will almost certainly be a recreation of a more authentic livery carried previously by this tram, however, and therefore 643 looks likely to remain unique. Although the tram is not technically preserved, it has at least been purchased by someone with an obvious interest in Blackpool’s tramway heritage, and should survive in its new form for many years to come as the first Centenary car to receive any significant work since the whole class were retired from front-line service in November 2011. 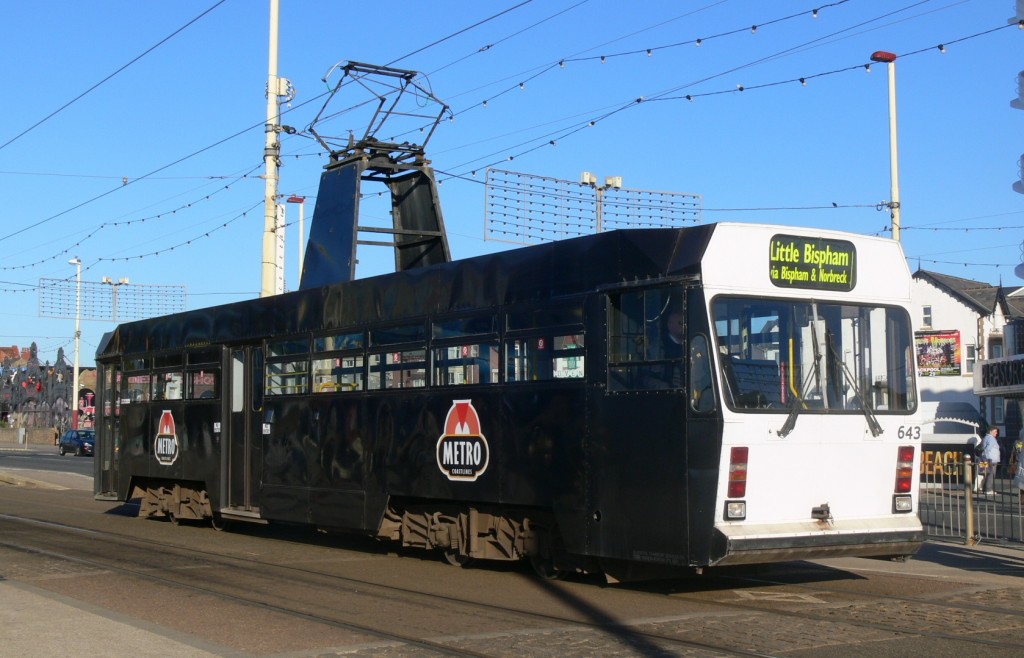 Blackpool 643 seen on its last ever day in service at Pleasure Beach, 6th November 2011, in glorious sunshine. (Photo by Andrew Waddington) 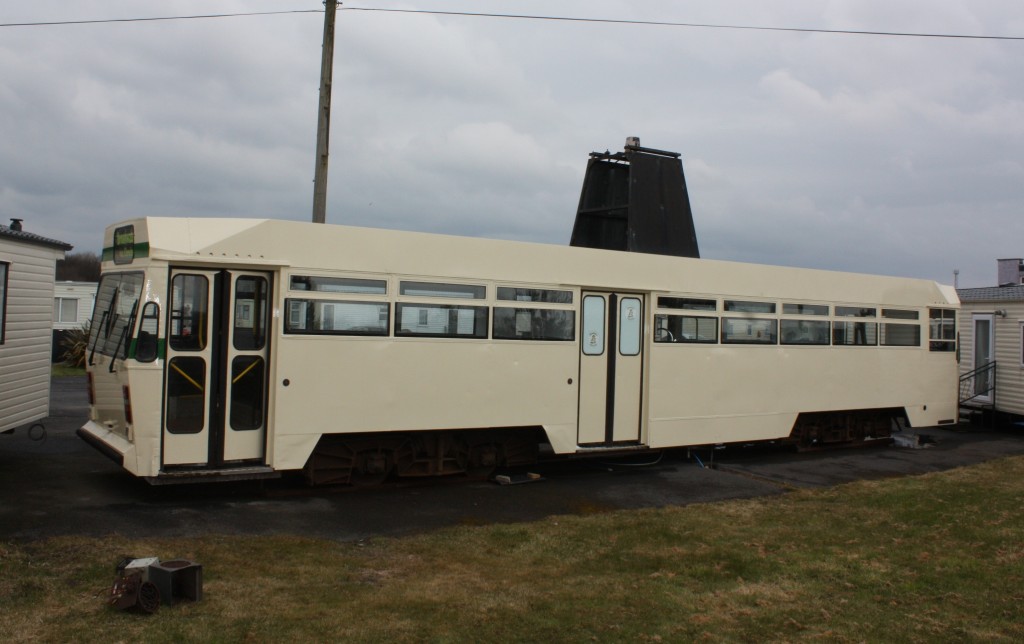 What a difference a coat of paint makes! The incomplete side of 643 is seen at Broadwater Caravan Park, with the green stripes visible on the end panelling, which will ultimately extend around the side of the tram. (Photo by Andrew Blood)

1 Response to Return of the green & cream Centenary car