The Blackpool tramway has been given a welcome boost, thanks to a surprise announcement by Blackpool Council this week that the town’s famous illuminations will shine for an extra week in 2013. It is expected that the ‘lights’ season will be extended to run for a further week in November, thanks to financial support from Merlin Entertainment, who own several prominent Blackpool attractions.

This decision has come as quite a shock as previous years have seen Councillors voicing concerns about the rising cost of the illuminations, with reducing the amount of displays and shortening the number of hours they are lit up on weekdays being suggested to cut costs. However, market research indicated that more than a quarter of the people who visited Blackpool in 2012, did so primarily to see the illuminations, giving obvious benefits to local businesses who can reap the rewards of a much longer peak season than other UK seaside resorts. Presumably Merlin Entertainment hope that their financial support will be rewarded with increased profits during the 2013 season.

One of the main highlights of 2013 for the town is the famous Tower which is now fully illuminated in coloured neon lights following the completion of work which has been ongoing for the last couple of years. The trams should not be left out either; some time ago, plans were revealed for preserved Brush Railcoach 621 to be renovated as a static illuminated feature car for display at Pleasure Beach, although as yet no more has been revealed about this project. Indeed, sister car 290 remains on its display siding at this location in its 2012 Diamond Jubilee livery, some four months after the lights last shone.

The illuminations were a good time for the traditional Blackpool trams during 2012; after low passenger numbers on the heritage tram coastal tours throughout the summer, the illumination tours did extremely well with reports that more passengers were carried on the tours than had been during 2010 and 2011 combined. Hopefully this will encourage Blackpool Transport to make attempts to utilise more trams to the tours, particularly at weekends, when on occasion potential customers were being turned away as not enough crews were available to cope with the high level of demand. Whilst it is perfectly understandable that the trio of illuminated feature cars will dominate the output, the likes of Bolton 66 and Standard 147 are also very appealing to the general public as well as tram enthusiasts, and are particularly well suited to viewing the illuminations, so hopefully these cars will see more use this year than last. 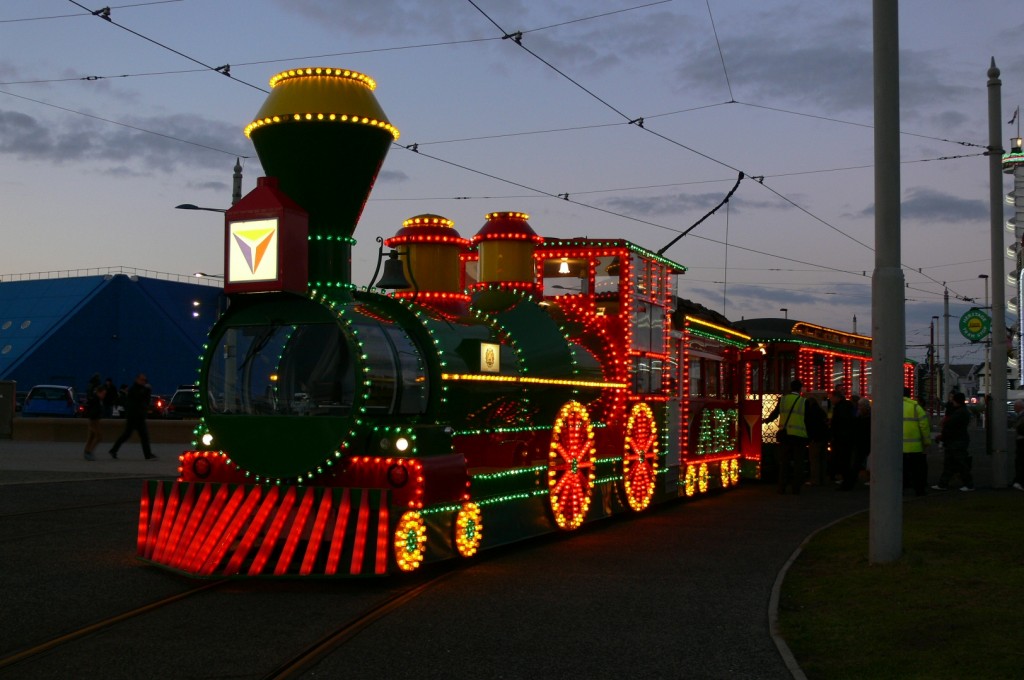 A typical scene from September 2012 which should be common again this autumn, with the Western Train 733+734 filling up with eager passengers at Pleasure Beach for another illuminations tour. (Photo by Andrew Waddington)