Last October, Centenary car 646 mysteriously disapeared from Blackpool after suffering from an act of vandalism. The tram had been purchased by furniture sales businessman Paul Gaunt and stored in the car park of his premises, pending eventual display as part of the Fleetwood Heritage Leisure Trust collection. Ater vandals damaged it, the tram was sold again and removed from its resting place. It has now been confirmed that, very sadly, 646 has since been scrapped.

After entering service in 1987, car 646 had a fairly mundane existence until 2000 when it was treated to a mid-life refurbishment, emerging a year later as the first to be rebuilt with restyled ends, which led to it being referred to by many enthusiasts as a shoebox! From July 2001 until its final withdrawal on 6th November 2011, the tram carried a series of advert liveries for Paul Gaunt Furnishings making this one of the longest-running advert contracts to stick with the same tram in history. It is also notable that it went from being in regularly daily use, to being broken up for scrap in just under a year – an unusually short space of time for a Blackpool tram, particularly by modern standards.

According to a reliable source of information and posted on the Trams Today Facebook site, 646 was moved to Preston in October 2012 and broken up soon afterwards. The person who had bought the tram had removed several items – including mirrors, a driver’s cab seat and the internal fleet number plaques – which were offered for sale on a popular internet auction site. At one time it was stated that two expressions of interest had been received for 646: one from a museum interested in displaying the body shell of the tram as a static exhibit, and the other from an unknown preservation group who wished to acquire its bogies for spare parts. Disapointingly, it would seem that neither option came to fruition and instead the tram was destined to end its days alone and seemingly unloved at a scrap yard in Preston – not exactly a fitting finale to the 25 year career of a tram which had provided invaluable year-round service on the world famous Blackpool tramway. Apparently 646 spent its final hours on the premises of a company named ‘Recycling Lives’, indicating that parts of the tram not sold to souvenir hunters may well live on in a totally different form!

The sad end for 646 makes this the first of the eight-strong Centenary class to be scrapped, and the first Blackpool tram lost since Balloon 722 was dismantled in Blackpool’s own workshops in 2009 after sustaining accident damage. Although 646‘s life was a short one compared to many Blackpool trams, it nonetheless made a significant contribution to the history of the system. Hopefully its demise will not be followed by its sisters, of which only 641 and 647 – arguably the two most valuable cars of the type – are technically preserved. 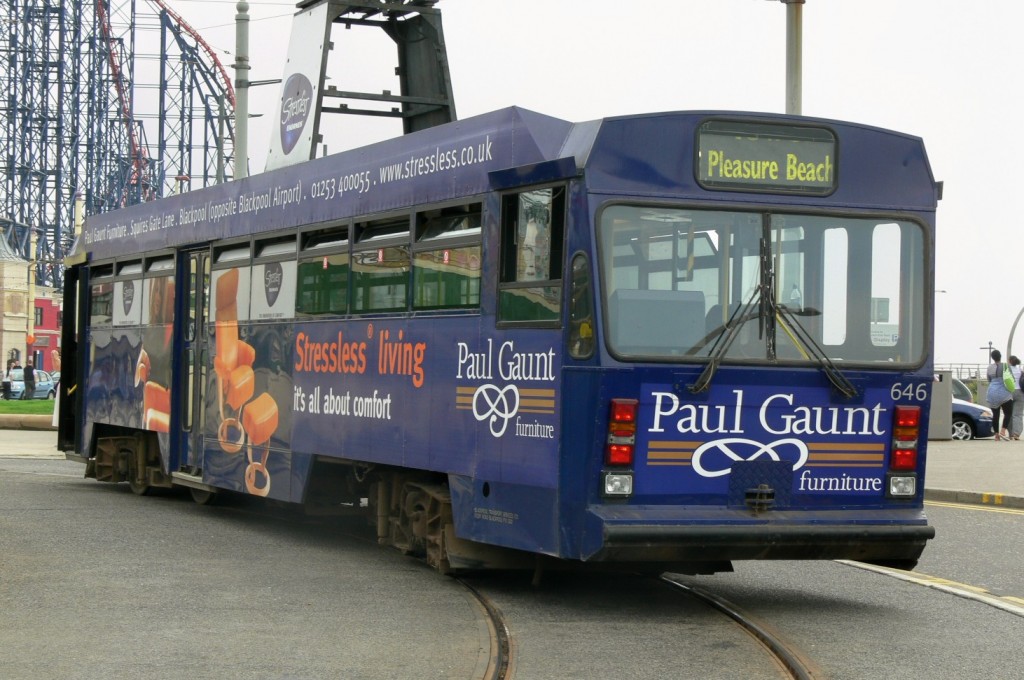 A typical scene from the archives, showing 646 in the third version of Paul Gaunt livery, reposing on the Pleasure Beach loop in August 2008. (Photo by Andrew Waddington)