Posted on Tuesday 21 January 2020 by Gareth Prior

After 15 months out of service a Citylink tram-train with the number 399 204 is back in service on Stagecoach Supertram after the completion of accident repairs. 204 returned to action – very briefly – on Sunday 19th January before it was used more extensively the next day.

The vehicle now numbered 399 204 is in fact two sections (one end and the central section) of the original 204 and one section of 202 (the other end) after both tram-trains were involved in accidents within six weeks of each other after the start of the service to Rotherham Parkgate in October/November 2018. The last day that 204 had actually was run the first day of public services on 25th October 2018.

The original 399 204 was out of service from this date but after a second collision involving 399 202 the decision was taken to use the good section of 204 with the good sections of 202 to make one good Citylink vehicle, using the number 399 202. After investigation at Nunnery Square Depot the decision was taken to return the damaged parts to Spain for repair with this happening on 21st February 2019. After attention it was back in Sheffield on 17th November 2019 and after further work was finally cleared for service in January 2020.

Sunday 19th January was the day and 399 204 left depot but after just 10 minutes failed in service at Arena and was forced back to depot. Try again! And that is what happened as on Monday 20th January it was allocated to service again first operating the 1039 service to Parkgate and continuing for the rest of the day.

As can be seen by the service mentioned above 399 204 is fitted with the tram-train wheel profiles. 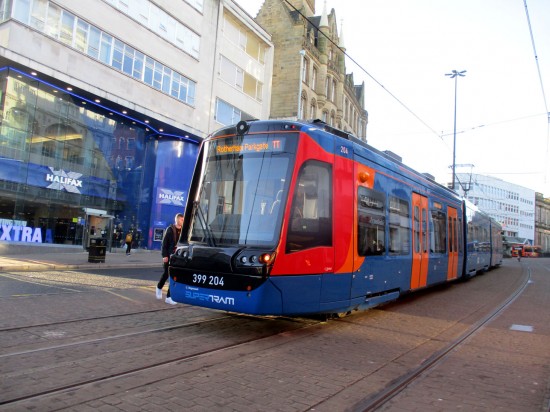 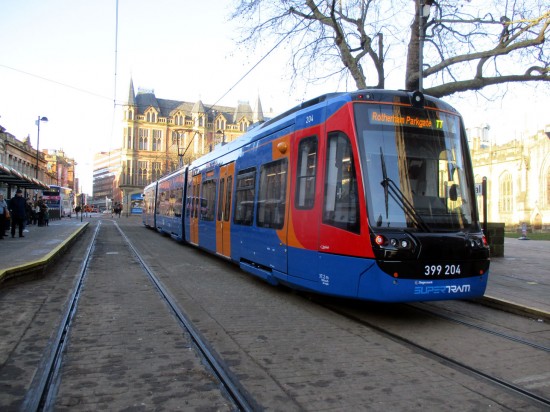 Two views of 399 204 at Cathedral as it operates the 1039 service to Rotherham Parkgate on its first full day in service. (Both Photographs by Stuart Cooke, 20th January 2020)