In Pictures: West Midlands Metro 32 in service with batteries

It was briefly mentioned in our article on the opening of the Birmingham Westside extension last week but 32 has become the 19th of the 21 Urbos3 trams to enter service with batteries fitted. It was used briefly on Wednesday 11th December but was then confined to depot for most of the rest of the week but has since started to see more regular use.

32 is the third tram which has had batteries fitted but has yet to have blue vinyls applied to the battery compartments, presumably these will follow at a later date once the vinyl company are back in town. The tram also retains its adverts for Ola.

Meanwhile, whilst the service does now require all trams to be fitted with batteries as the route from Grand Central to Library is overhead free there do remain two trams not so fitted: 26 and 27. Their use is expected to be minimal before they get batteries – expected to be early 2020 – but on Monday 16th December 26 was in service during the morning peak but was only able to run from Wolverhampton St George’s to Grand Central before terminating. Presumably there was a shortage of battery fitted trams on this day. 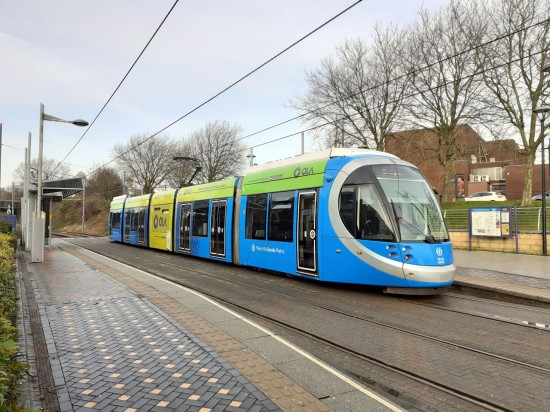