After 14 months out of use the Wolverhampton bound platform at Grand Central will reopen to passengers from Sunday 1st December – the first day of the new timetable and also expected to be the first day of the full shadow service onto the Birmingham Westside extension.

Since September 2018 all trams at Grand Central have arrived and terminated at the same platform whilst work on the extension further along Stephenson Street was taking place but now, finally, this arrangement will end and anyone wishing to travel north out of Birmingham will have to head over the tracks again to use the standard platform.

As is common with all tram systems before the extension to Centenary Square opens to the public there will be a period of full shadow running serving the new line. This will see trams running to timetable with passengers able to travel all the way between Wolverhampton St George’s and Grand Central before having to alight, the trams themselves will then continue onto the extension to test the timetable and infrastructure.

Carl Williams, West Midlands Metro Director of Operations, explained more: “We are now entering the final phase of preparations for the opening of services through to Centenary Square and this involves intensive testing of our new timetable which is being improved to include the two new tram stops at Town Hall and Library. At present, tram services will still terminate at Grand Central but after customers have disembarked, trams will then continue to run to Centenary Square and return to go back into Wolverhampton bound service from the re-opened Grand Central platform. It’s a very important part of the whole testing and commissioning programme so that we can deliver the best possible service to our customers when we open. We’ll be continuing to update our website and social media channels to announce our launch plans when we are in a position to do so.”

Until this testing is deemed a success there will be no announcement of a launch date but 8th December is still widely considered to be a start for services to Library – however, watch this space for the final confirmation! 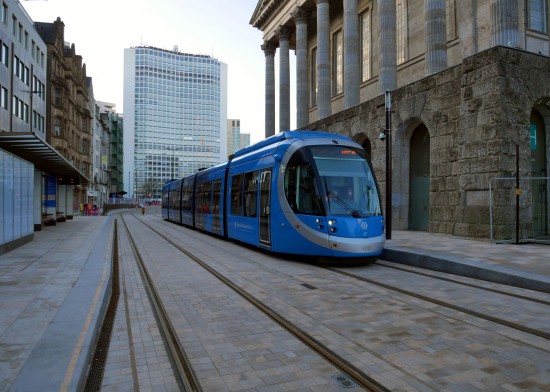 Testing has been ongoing for a while now and on 29th November 17 was caught pausing at Town Hall collecting construction staff. The tram was running a return trip from the temporary Library terminus. (Photograph by Roland Bull)