Posted on Thursday 21 November 2019 by Gareth Prior

We may have finished our look at the trams running at the Glasgow Garden Festival last week (for now at least, we have more coming to you at some point in 2020!) but that doesn’t mean we are finished with trams in Scotland for our archive photo series as its off to Summerlee this week.

The tram we look at in the photo below is the “one which got away” as sadly it had to be scrapped after suffering from vandalism in 2004. Brussels 9062 was in fact the first tram to arrive at Summerlee in 1988 and was soon operating on a 200 metre length of track at the museum, a line which would be extended in the following few years until it reached its current length between the entrance and the mine. 1988 was obviously a good year for trams in Scotland as from not having an operating line since 1962 it suddenly had two! As the years moved on the use of 9062 became less as more local trams were restored and entered service and then in 2004 the vandalism attack saw it damaged beyond economical repair and the decision was taken to scrap the car.

This image shows 9062 at the entrance in 1988 with fairly bare surroundings in the early days of the museum. 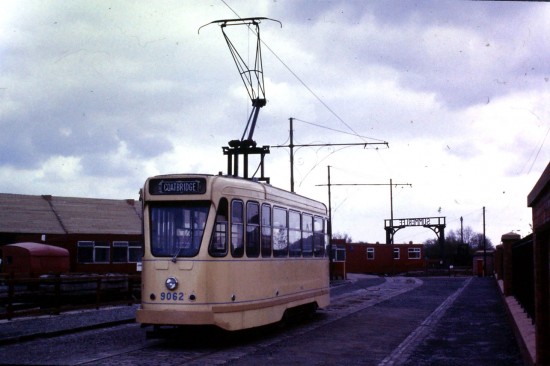