Blackpool Brush 298 to return to Crich to start restoration

The first planned move of a tram in 2020 has been confirmed, although this will not a be a mere tram loan as it will see Blackpool Brush Railcoach 298 return to Crich from the Tramway Museum Society’s Clay Cross store for a start to be made on its full restoration to original 1937 condition – set to be the only Brush Car preserved in this condition.

The Tramcar Sponsorship Organisation have committed to support the restoration with funding and the TMS board recently approved the project to return the tram to operation. As stage one of the restoration it will be necessary to extract 298 from Clay Cross and transport it the fairly short distance to Crich where a start can be made on the significant work to return the tram to operational condition once more. No timescale has been announced for the project but work will not start in earnest until the current large projects to restore London County Council 1 and Newcastle 102 to service have reached a conclusion.

This will be the second time that 298 has been transported to Crich with the tram having previously been on site between 2005 and 2014 when it was a static exhibit before being moved off-site to Clay Cross in July 2014 to create extra space at the museum. But although out of the public eye work has been ongoing behind the scenes to plan its restoration and at some point in the next 12 months this will start once more. The tram was withdrawn in 1974 in Blackpool and became the first Brush Car to be preserved with it retaining a number of original features.

Some restoration work has been undertaken in the intervening 45 years but a significant amount of work will still need to be done to bring the tram back to operational condition. It will take a while but at some point in the future we will once again see an original condition Blackpool Brush Railcoach in service when it will surely become another of the prides of the fleet at Crich. 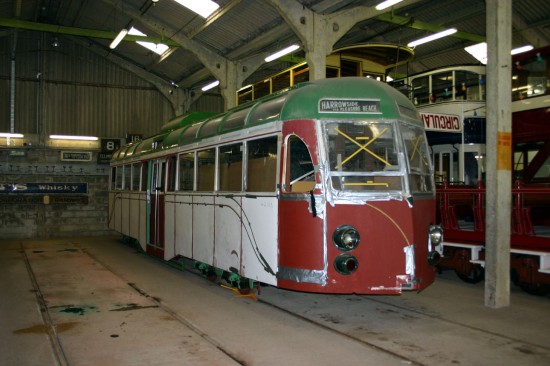 298 at Crich in June 2012, some two years before it left for off-site storage. The tram is in much the same condition today. (Photograph by Gareth Prior)