The next tram to Victoria is…Manchester 173!

Posted on Wednesday 16 October 2019 by Gareth Prior

Manchester 173 is going to escape its home at the Heaton Park Tramway for one day only on Sunday 20th October when it heads to Manchester Victoria to take part in the 175th birthday celebrations of the station. Despite pre-publicity for the event by Northern stating that you will be able to “ride on a heritage tram”, 173 will in fact be a static exhibit throughout the day.

This will not be the first time that Manchester 173 has headed on the back of a lorry away from Heaton Park as it previously went to Leeds twice in 2014 for display as part of the commemorations of the start of the First World War but it does mark its first trip away from the Heaton Park Tramway in over five years,

173 is usually stored in the depot at Heaton Park as although cosmetically restored it is not a runner requiring significant workshop attention before it can operate for the first time on the tramway. It is towards the top of the list of trams to be restored but with work concentrating on Stockport 5 and Blackpool 619 its place in the workshops will have to wait for a little while yet. Regularly displayed on the tramway during special events this visit to Victoria will enable more of the wider public to take a look at the tram in unusual surroundings.

The event will also include live music as well as there being various stalls on offer. 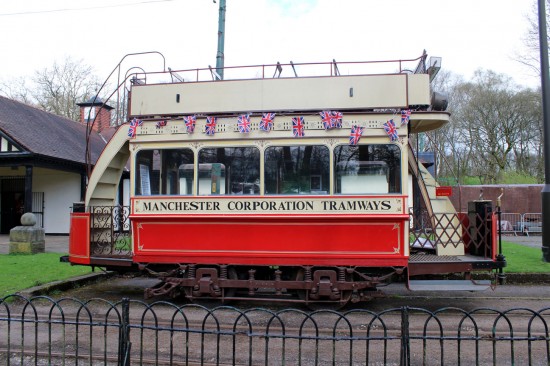 Manchester 173 is seen here outside Middleton Road Depot on 2nd April 2017. (Photograph by Gareth Prior)