This week our traditional tram edition of Picture in Time is off to Glasgow for the first of several photos taken during the 1988 Glasgow Garden Festival which featured an operational heritage tramway.

The first tram we take a look is one which hails from that very city – Glasgow 22. 22 was one on five trams to operate at the Garden Festival (three coming from Crich) and was to be the “pride of the fleet” during the festival as it was the official tram conveying the royal party at the opening of the event on 28th April. It would go on to travel almost 4,000 miles during the five months of the Garden Festival. This was actually the third of five Garden Festivals which took place across the UK between 1984 and 1992 but would be the first to decide to add an extra attraction of an operating full gauge tramway through the middle (but not the last as the next festival two years later in Gateshead would replicate the idea) of the event.

In this first photo we see 22 with 1972 P&O ferry “St Sunniva” in the background. This ferry was a former Cross Channel ferry that had arrived in the Clyde on a charter for the opening of the Garden Festival as was caught up in a crew dispute while docked. It was usually used on the routes from the north of Scotland to Orkney and the Shetland Islands but would end its days in Alang, India in 2005 when it was scrapped. 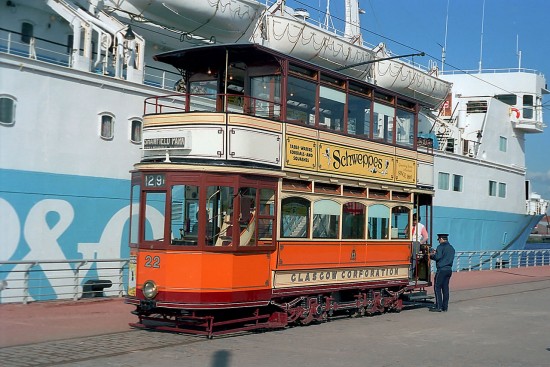 In the second view below we again see 22, this time heading along the line. This photo shows the proximity of the tramway to the River Clyde and the popularity of the event with barely a spare seat to be found. 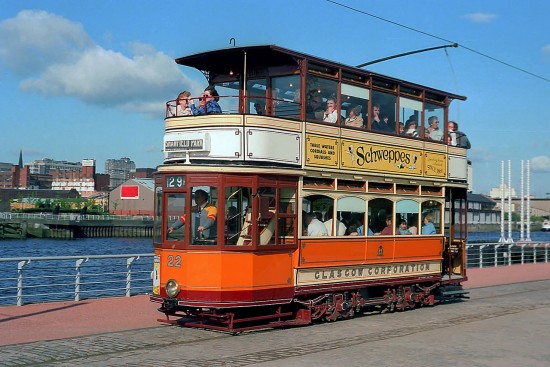 Both Photographs by Bob Woolnough

1 Response to Picture in Time: Glasgow 22