A soggy September Spectacular in Blackpool

What’s that saying about the best laid plans? Well, that is exactly how the organisers of the September Spectacular must have felt with very heavy rain at times and of the three trams due to return to service over the weekend, none managed it thanks to various technical issues. But despite these issues there were 16 different heritage trams which ran over the weekend which included the rare use of all three illuminated feature cars during the day with two of them heading to Fleetwood.

As is usual during the illuminations, Friday afternoon saw a two tram heritage service in operation, and as would become a regular occurrence during the weekend wet weather was also in operation from above! Because of the weather it was no surprise to see two fully enclosed trams in service with Brush 631 and Balloon 723 running the service from 1300. The trams mainly run between North Pier and Pleasure Beach but there are a couple of journeys to Cabin with 723 the tram on the diagram covering these.

In the evening three trams ran illumination tours: the Frigate, Western Train and Balloon 701. In addition to the FTS tour there were two other specials out with Balloon Cars 715 (Ghost Tram) and 717 (Fish and Chips) in action.

Onto the main event and the day started off with sunshine, a rare sight for the weekend! On normal Gold weekends trams are allocated to a diagram and you know exactly where a tram should be at what time but with the Spectacular it is very much more a case of the old days of specials being sent from Pleasure Beach to lots of different destinations. In addition to trams running from Pleasure Beach there are also trams dedicated to a service between Starr Gate and Fleetwood and a depot shuttle linking the two depots to help transport those who chose to go for behind the scenes tours.

In total there were 11 different trams operating in service on this first day of the event with Brush 631 and Railcoach 680 dedicated to Starr Gate-Fleetwood circuit and Balloon 713 on the depot shuttle. Also out were Bolton 66 (retiring to depot early after a downpour), Standard 147, Boat 227 (again returning to Rigby Road earlier than planned because of the weather), Centenary 648, Balloon 701, Balloon 715, Balloon 717 and Balloon 723.

These trams weren’t quite what was advertised with expected returnees Standard 143 (as well publicised absent with a motor fault) and Centenary 642 (unable to run because of technical issues) both missing and replaced by their fellow class members 147 and 648. Also missing from the advertised list were Balloons 700, 711 and 719 along with the Western Train. Despite these absentees there was still a good selection of trams in service with fairly positive passenger loadings throughout the day.

The weekend also sees a number of static displays, usually just at Rigby Road Depot but this time also at North Pier/Tower. As we’ve reported in previous articles at North Pier it was Standard 143 on display, situated alongside Balloon 718 which was in use as the shop for the weekend. The B fleet Balloon, but on loan to heritage tram tours and in a heritage livery, was used to tow 143 to and from its display location at the start and end of the day.

Meanwhile, down at the depot this year the line-ups were themed with different themes on the depot fan and along Blundell Street. The depot fan looked at the one person operated story with OMO 8, Jubilee 761 and Centenary 645 on display whilst on Blundell Street the tram which will hopefully benefit from the appointment of a new electrician to undergo full rewires were out: Boat 230, Brush 634 and Twin Car 675+685.

The evening saw 12 illumination tours run with the Frigate and Western Train leading the way with three tours a piece. The other three trams in use were all Balloon Cars with 701, 723 and 717 running two tours each.

What to say about this day apart from the fact that until early afternoon it was incredibly wet. Funnily enough the wet weather did cause some tram changes in the output as it wasn’t considered appropriate for either Boat 600 or Bolton 66 to run (the only boat you needed in the morning would have had oars it was that wet!). Also missing from the pre-publicised line-up was Balloon 707 (another tram with technical problems which had been due to return to service over the weekend) along with Standard 147 and Balloon 701, although this latter two trams would appear in the afternoon, when several extra trams would enter service.

The day started with Brush Cars 621 and 631, Centenary 648, Balloon 713, Balloon 717, the Frigate and a rare appearance for the Trawler (currently unable to be used on illumination tours due to a fault with its LEDs) running on specials from Pleasure Beach, Balloons 715 and 723 on the Starr Gate-Fleetwood service and B-fleet Balloon 711 on the depot shuttle. But that was not to be the end of it because as the day moved on more trams were to come out! Standard 147, Railcoach 680, Balloon 701 and the Western Train were all in service by the afternoon bringing a total of 14 trams running heritage tours.

The afternoon saw trams being sent away from Pleasure Beach to various locations north and this included both the Frigate and the Western Train dispatched up to Fleetwood and then back into depot – very rare journeys for these trams, especially on the same day and within an hour of each other. It was rare enough that they were both out at the same time in daylight (along with the Trawler too, giving a hattrick of feature cars). 723 was also taken off the full length service with 713 taking over for one Fleetwood trip whilst after the last depot shuttle 711 also managed a heritage trip to Cleveleys and back, with this tram also being utilised on services calling at the light rail platforms Mondays to Thursdays whether its use for heritage services was sensible is another thing.

Again, there were static displays (despite the horrendous weather!) with 143 back at North Pier (along with 718 as the Shop). At Rigby Road, Blundell Street saw the next two major restoration projects displayed – Balloons 704 and 706. It is expected that 704 will be the first into the workshops and be displayed in its faded Eclipse advert with the condition of the tram not the best it will be a well deserved restoration for this tram. Meanwhile, it was all about the Twin Car on the depot fan with sets 1, 2, 5 and 6 all on display with Engineering Car 754 also joining in on the act.

The weather had taken a turn for the better in the afternoon and so illumination tours saw both Boat Cars out! 227 and 600 both ran two tours each and were joined by regulars the Frigate and Western Train along with Balloon 717. With the Boat Cars out in the evening it meant there were 16 different heritage trams running on this day – not too shabby is it?

Whilst it was certainly unfortunate that the three headline returning trams didn’t make it onto the starting grid (143, 642 and 707) and despite the hideous weather for long periods of time the 2019 September Spectacular was still an enjoyable event with plenty to keep you occupied over the two days. The Sunday afternoon in particular, when trams seemed to be coming at you from all angles!, was a highlight especially with all three illuminated feature cars out including both the Frigate and Western Train travelling to Fleetwood. Roll on next year’s event! 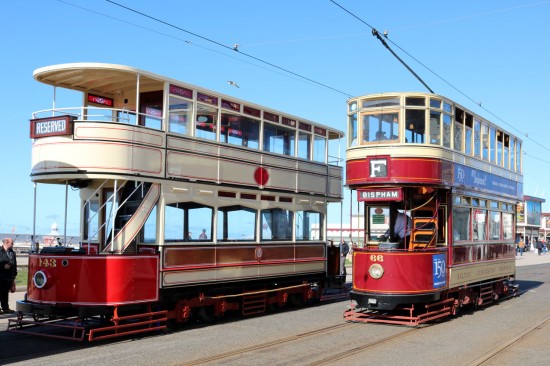 On a sunny 28th September and Bolton 66 passes Standard 143 at North Pier. 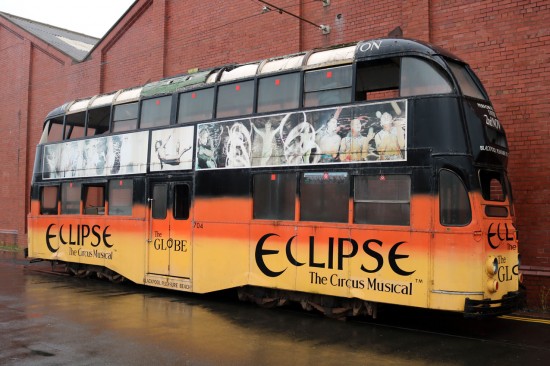 Sunday 29th September and one of the trams on display was Balloon 704. Showing the ravages of many years out of service and stored the tram is seen on Blundell Street. 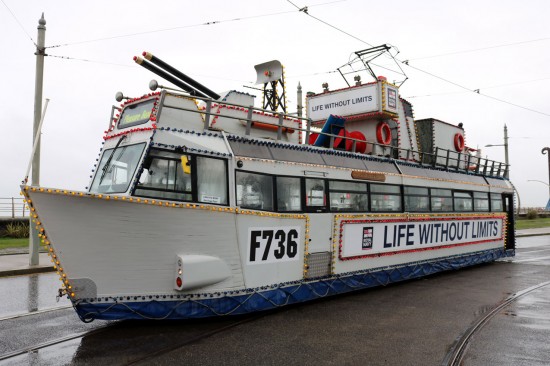 The Frigate was in service on 29th September and is seen here on Pleasure Beach loop. (Photographs x3 by Trevor Hall) 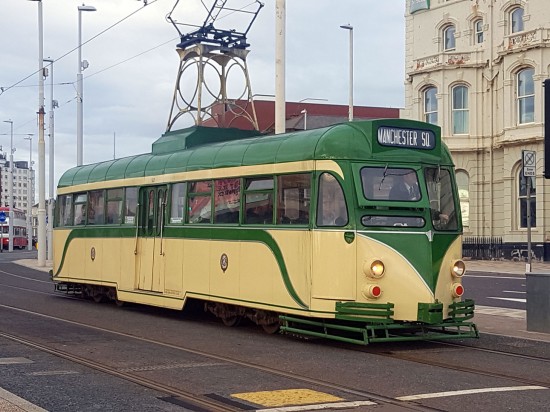 Also in service on the Sunday was Brush 621. We catch-up with the tram at North Pier. 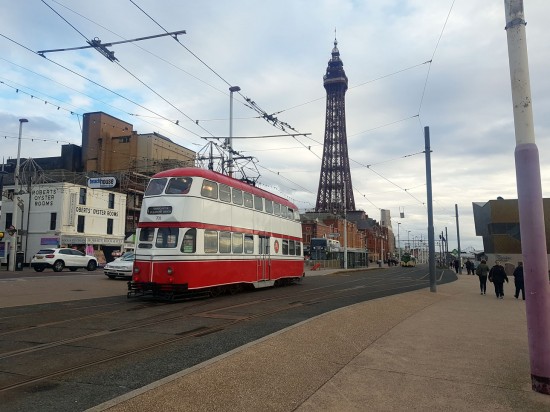 Balloon 701 was in service on both days with this view of the tram at North Pier on the Sunday. 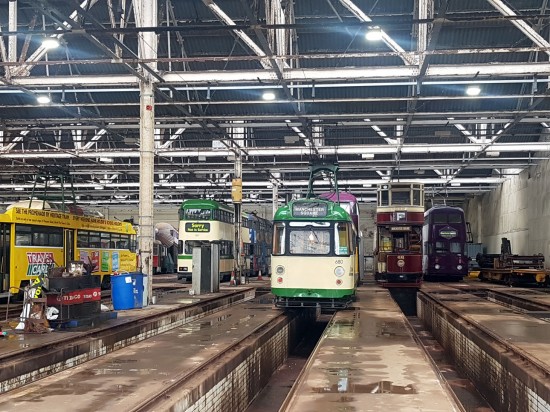 As part of the behind the scenes tours it was possible to take a peek into the depots. This view shows Rigby Road with both Centenary 642 and Balloon 707 visible on the left here. Also just visible at the back of the depot is the Rocket with Halle 902 just in front. (Photographs x3 by David Maxwell) 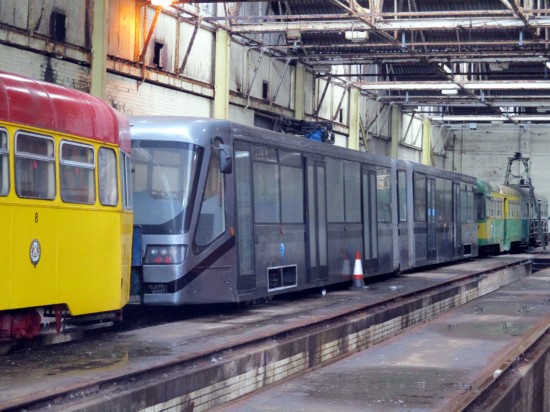 Another look inside Rigby Road with the stored Trampower vehicle in between OMO 8 and Twin Trailer 681. Brush Works 259 is at the rear. 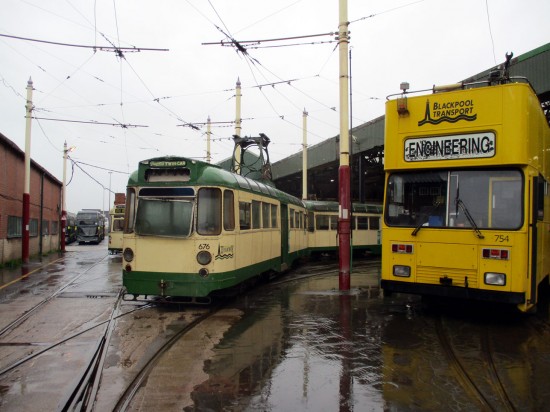 On the depot fan on day two and we see Twin Car 676+686 in the centre of the shot. Set 2 can just be seen on the left with Engineering Car 754 on the right. (Photographs x2 by Stuart Cooke)

10 Responses to A soggy September Spectacular in Blackpool