We have a lot to be grateful for to various transport undertakings across the country as if they hadn’t converted earlier passenger trams into works cars there may be several types of tram we now enjoy which had been confined to the history books. One such example comes from Blackpool and at the time of the feature of today’s Picture in Time edition was Engineering Car 754.

Nowadays we know this tram far better as Marton 31 but in the 1970s the tram was very much part of the works fleet in a drab works green livery. 754 – or 4 as it was originally numbered when first part of the works fleet – was converted into an overhead line car in 1934 following its withdrawal as a passenger car. It was renumbered to 754 in 1972 which dates this photo to post-1972 when it was captured stabled in the depot outside the Electrical Compound. Also visible in this image at the back of the Electrical Compound is an unidentified Boat Car – almost in the exact same position as 230 can be seen today! 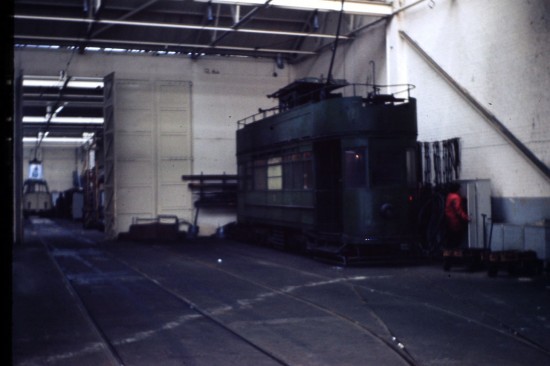