Not only do we stay at the East Anglia Transport Museum this week but we also feature the same tram as we saw last week, although this time it is joined by a fellow Blackpool tram. The two trams in question are Marton VAMBAC 11 and Standard 159.

The below photo was taken at some point between 1975 and 1982 and is at the Chapel Road terminus – still a very familiar starting point for tram journeys at the museum today once you have gone through the entrance. The big difference today is the lack of development around the tram, both within the museum and outside, but it does illustrate how far this museum has come in the intervening 40ish years.

As for the trams we wrote all about 11 last week so this time we can concentrate a bit more on 159 which has been one of the mainstays of the operational fleet ever since it opened. At this time it was in a much simplified green and cream livery style with no lining out. 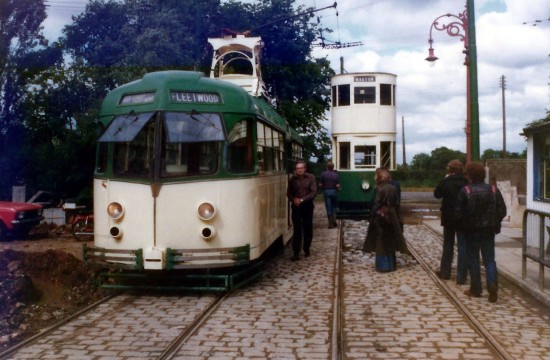