This week as we return to Blackpool for some another archive image we are in the 1970s for a view of two stabled illuminated trams.

This photo was taken within the shed at Rigby Road Depot and shows two of the 1950s/1960s built feature cars – the two of which have enjoyed very different lives since. On the left we see the Blackpool Belle, numbered 731, the very first of this period of feature cars and it is joined by the original style of Warship for 736.

731 was built on the underframe of Toastrack 165 with the works to covert it into the Blackpool Belle – based on a Mississippi Paddle Steamer – taking just five months. It entered service in time for the 1959 illuminations and would lead to further feature cars being constructed during the 1960s. 731 was to remain in service until 1978 when it was withdrawn before being sold to a tramway in Glenwood, Oregon where it continued to operate until the early 1990s. After a further spell of operation at Willamette Shore Trolley it returned to Glenwood in 1996 for storage and was then sold on for experimental use. Although no official confirmation seems to have ever been received it is widely suspected the tram was scrapped in the early part of this century.

Alongside 731 is 736 which had entered service in 1965 based on the underframe of Pantograph 170 and was designed on a warship. It remained in service until 2001 when withdrawal came but it was to be rebuilt over 2003/4 into a new style before returning to service during the 2004 illuminations – at the time one of only two feature cars available for service.

With the illuminations ablaze as the two trams are seen outside the Electrical Compound this image as taken at sometime during the 1970s (both these trams carried these adverts through the 1970s until 731 was withdrawn which doesn’t help with dating the image!) 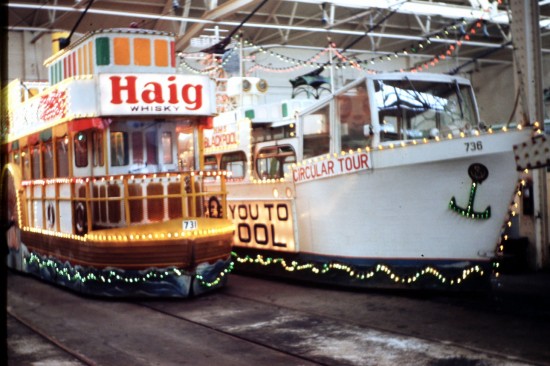