Posted on Thursday 15 August 2019 by Gareth Prior

Whilst there were nationwide power supply issues affecting various transport operators on Friday 9th August there were further issues for the Tyne and Wear Metro (which had also been affected during the high-profile failure) on Monday 12th August with the Airport line having to be temporarily suspended whilst these were repaired.

The Airport line was affected on the Friday and was then closed all weekend to allow for some pre-planned engineering works but just when it was hoped that everything would be back up and running on Monday 12th August the Metro announced that they were having further power supply problems.

The problems were evident from the start of service with initially no trains able to operated between Airport and Kingston Park before the closure was changed to between Airport and Regent Centre and then back to the Airport to Kingston Park section. Metro maintenance staff were sent to the scene and managed to locate and fix the problem allowing a full service to resume from just after 0930, but not before it had caused disruption for several hours. 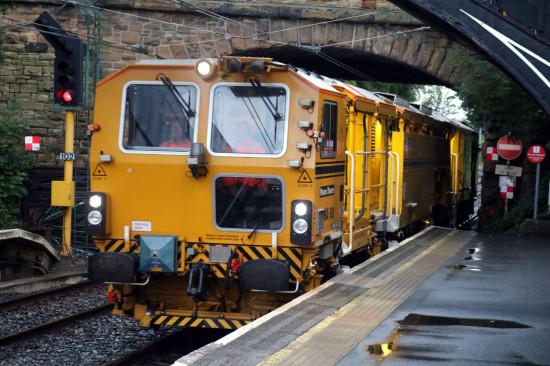 In connection with the works on the Airport line over the weekend Metro’s own track machine MA60 was on the move and is seen here heading through South Gosforth towards the siding south of the station. It is unusual to see the track machine running on open sections of the Metro whilst passenger services are running. (Photograph by Trevor Hall, 10th August 2019)