In Pictures: More blue trams on the West Midlands Metro

Posted on Monday 12 August 2019 by Gareth Prior

You turn your back for five minutes and suddenly the number of blue trams on the West Midland Metro increase still further! We last reported on the fifth fully blue liveried tram (29) which returned to action in the new style on 5th August but since then not one, but two further battery fitted Urbos3 trams have been wrapped in blue.

First to be attended to was 28 which re-entered service sporting the West Midlands Metro blue livery on Sunday 11th August – the sixth such tram to run in passenger service with the full new house colours.

But that’s not the only tram now in blue as 30 has also received the vinyls and has been seen stabled around the depot in this condition. When 30 does return to service it will become the first of the Urbos3 trams not to run in the old Magenta and Silver livery after the fitting of the batteries.

With seven trams now in blue this means that one third of the fleet are in the new style. If you include the three trams with adverts and the 20th anniversary livery there are now only 10 trams remaining in the old magenta and silver livery – in other words if you want to see the old livery you best get to the West Midlands soon! 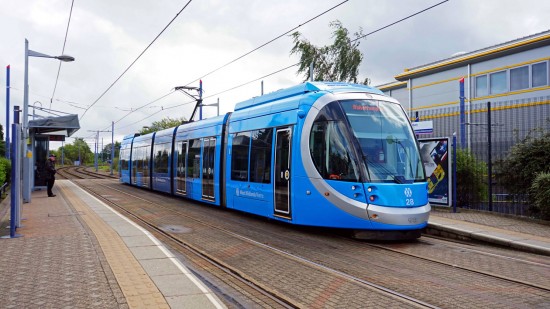 28 in the blue livery at Wednesbury Great Western Street. 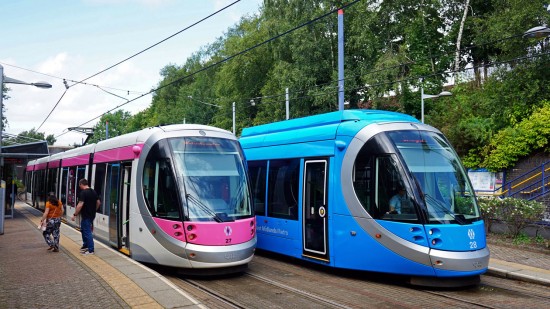 Consecutively numbered trams at Dartmouth Street. On the left we have 27 still in the magenta based livery and without batteries whilst its future is seen on 28 which has the full new West Midlands Metro look. 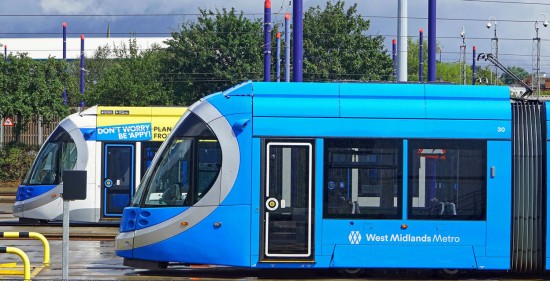 30 has also received the blue vinyls and is seen here sitting in the depot awaiting for its move to the operational fleet once more. 36 can also be seen here carrying adverts for the My Metro App with saw the magenta removed but not the full new look applied. (All Photographs by Andy Walters, 11th August 2019)