Posted on Tuesday 13 August 2019 by Gareth Prior

In this edition of Picture in Time we again travel to Blackpool and this time feature one of the one person operated Centenary Cars.

We are looking here at Centenary 645 which by the time of the photo in 2007 was in an all over advert for the Palm Beach Hotel – the second such tram to advertise this, now closed, hotel following the wheels of Balloon 701. With a blue base coat and extensive use of contravision the advert had received these vinyls back at the tail end of 2005 and would keep the advert all the way through until 2009. A further all over advert followed for Jet 2 Holidays before it ended its operational days in a red livery. After being sold to a caravan park 645 did leave Rigby Road for a time but after it was deemed surplus to requirements it returned to the depot in July 2017 and remains stored to this day. 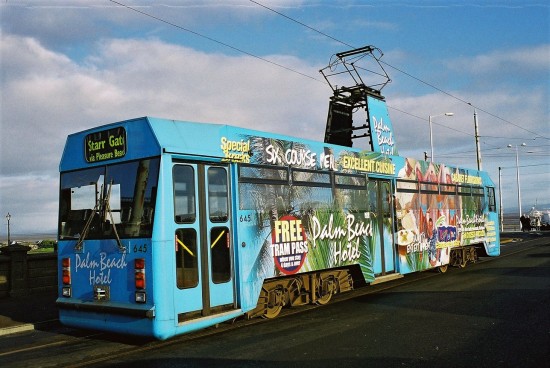