Metro 19 back in service

And then there were 10! Saturday 25th May saw the tenth of the West Midlands Metro Urbos3 trams to enter service fitted with batteries fitted when 19 undertook its first revenue earning runs.

19 had received the batteries last month and since then has been undergoing the usual testing and commissioning process which was finally completed in mid-May before the tram was handed over to enter service and this took place on Saturday 25th May. The tram remains in the old magenta and silver livery complete with West Midlands Metro logos.

The other nine battery fitted trams are 17, 18, 21, 23, 28, 31, 35, 36 and 37. There now remain 11 trams yet to have the work to install the batteries and it is expected these will be gradually treated over the next few months ahead of the opening of the first sections of track without overhead on the Birmingham Westside extension due to open late 2019.

Elsewhere 26 remains out of service but is currently inside the workshop. This was the tram which suffered damage in a derailment at the depot and had gone to Wolverton Works for repairs. Despite returning to the West Midlands in March 2018 it still hasn’t returned to service but hopefully the fact that it is now inside the workshop may suggest it will return to action in the future. 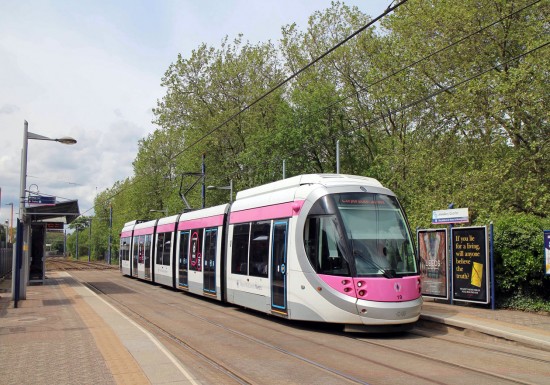 On its first day in service 19 stands at Jewellery Quarter with a service unusually terminating at Corporation Street in Birmingham City Centre. (Photograph by Andy Walters, 25th May 2019)