Posted on Wednesday 20 February 2019 by Gareth Prior

Another tram fitted with batteries has returned to service on West Midlands Metro with the very first of the Urbos 3 trams, 17, carrying fare paying passengers for the first time in this condition during the evening peak of Wednesday 20th February 2019.

17 had been undergoing testing and mileage accumulation in recent weeks since it had received the batteries and this work was completed earlier this week allowing it to be released back to the operational fleet. Whilst new liveries have been unveiled on several trams in recent weeks for 17 it is the old style Magenta and Silver livery that is still carried.

This now means that eight battery fitted trams are available for service: 17, 18, 21, 28, 31, 35, 36 and 37. The installation seems to show no sign of slowing down either with another tram being so treated at the moment. With the Birmingham Westside extension including non-overhead fitted sections the majority of, if not all, the trams will need to have batteries by the end of the year when the line opens to Centenary Square. 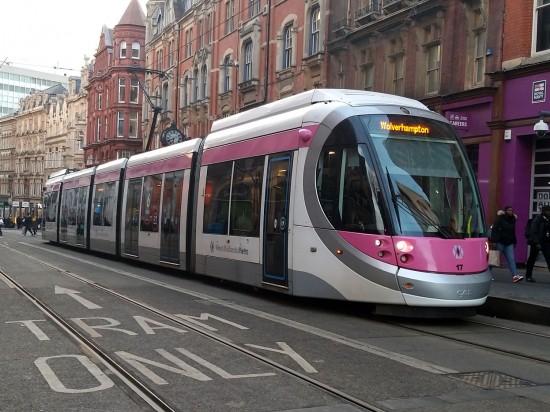 17 on the evening of 20th February at Corporation Street heading north to Wolverhampton St George’s. (Photograph by Mark Cufflin)