Posted on Tuesday 19 February 2019 by Gareth Prior

It would seem that West Midlands Metro have well and truly got in the act of advertising liveries as less than a fortnight since the first tram was unveiled in a special livery another has been noted carrying vinyls. The new livery on 21 follows the same pattern as that seen on 36 but includes adverts for Just Eat – the first commercial sponsor on one of the Urbos 3 trams.

21 again features blue ends with adverts for Just Eat featuring full height on the centre section of the tram and above the windows on all other sections. It again means that the former magenta colour is non visible on the tram leaving the white and grey sections still in situ. The tram was first noted in this livery on Monday 18th February.

It looks as if 21 may not be the last tram to receive this new hybrid livery either as 18 has been seen around the depot receiving the blue ends.

West Midlands Metro becomes the third UK tramway to feature an advertising livery for Just Eat following in the steps of Nottingham Express Transit (still in place on Incentro 210) and Manchester Metrolink (both 3039 and 3085 carried full vinyl wrap adverts for a period in 2018). 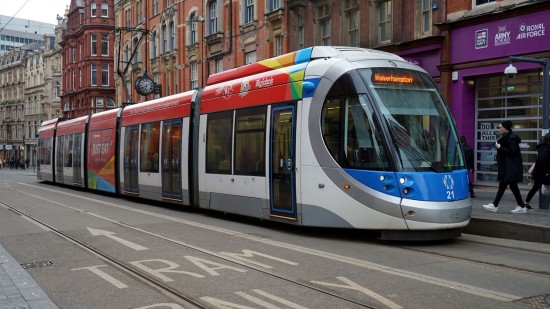 The new look for 21 is seen here to full effect at Corporation Street. 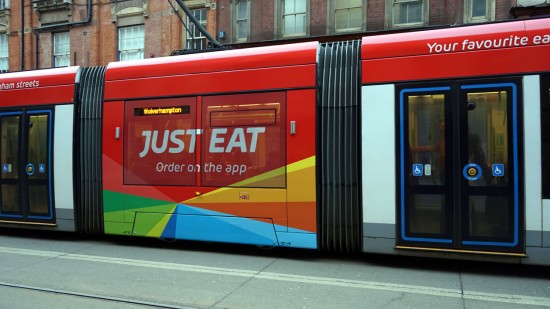 The centre section of 21 showing the full height advert for Just Eat. 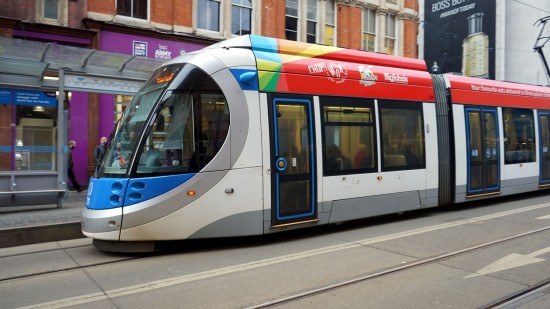 The Birmingham end of the tram as it leaves Corporation Street. (All Photographs by Andy Walters, 19th February 2019)