Posted on Tuesday 19 February 2019 by Gareth Prior

A very long-term advert is the feature of Picture in Time today as we take a look at the first of two designs for Karting 2000 on Blackpool Brush 630.

Originally applied during 1998 the mainly yellow design for Karting 2000 was a very familiar sight on Blackpool Promenade for nine years until 2007 when it was replaced by a new design for the same sponsor. Karting 2000 was originally based alongside Starr Gate loop adjacent to the large car park which was obviously swept aside by the new tram depot construction works with the business being moved to South Pier.

This image shows 630 in its original Karting 2000 style working specials to Cabin. 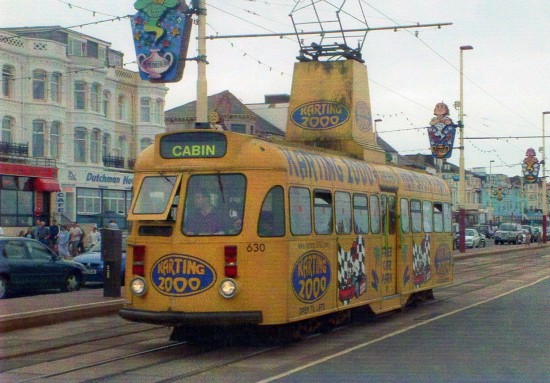