A new arrival at Crich

Posted on Wednesday 21 November 2018 by Gareth Prior

Its been a busy few days for Crich as following hot on the heels of yesterdays news about the formal acquisition of the Barnsley & District bus comes the arrival of a new tram on site. However, this tram will not ever be seen in service as it has been acquired to give an example of a grounded body – a fate which befell many trams following the closure of their networks – and a major part of tramway history. The tram in question – which won’t become part of the national collection – is Nottingham 45 which was previously stored at the Great Central Railway (North).

Indeed we featured this tram just last month (see article here) with a photo of it in its resting place at Ruddington showing the body to be in seemingly good condition. 45 was built back in 1901 by ERTCW and was an open topper during its service days. Sold on upon its withdrawal it was used at a caravan park until the 1980s when it was preserved by the Nottingham Industrial Museum. It remained there until 1996 when it moved to Ruddington and it has stayed there ever since.

The body of 45 was transported to Crich on Wednesday 21st November with the familiar sight of a Scotts low loader making the fairly short trip between the counties of Nottinghamshire and Derbyshire. It has been placed alongside the top of the Bowes Lyon Bridge although the exact details of how it will be used as an example of a grounded body have yet to be publicly announced. 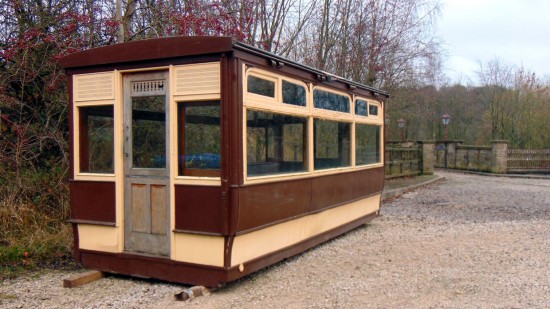 1 Response to A new arrival at Crich