Posted on Thursday 25 October 2018 by Gareth Prior

For a system which closed for the last time in 1936 there are a number of Nottingham Corporation Tramways tram bodies which have remained intact in various states. As well as several parts of trams from this network being in the care of the Tramway Museum Society – albeit all stored at Clay Cross waiting their turn for restoration (with the likelihood only one will ever run again and that will be a very long-term project) – there is the lower saloon of a further tram at the Great Central Railway (North) at Ruddington. This is the remains of no. 45.

45 was built by ERTCW as a double deck open topper in 1901 and following withdrawal from service was sold on for further use with it finding its way to a caravan park. There is remained until the mid 1980s when it was rescued for preservation to the Nottingham Industrial Museum. A further move followed in 1996 to the Nottingham Transport Heritage Centre in Ruddington which has now developed into the Great Central Railway North. Only the lower deck remains and it is stored outside but is in a generally good condition. 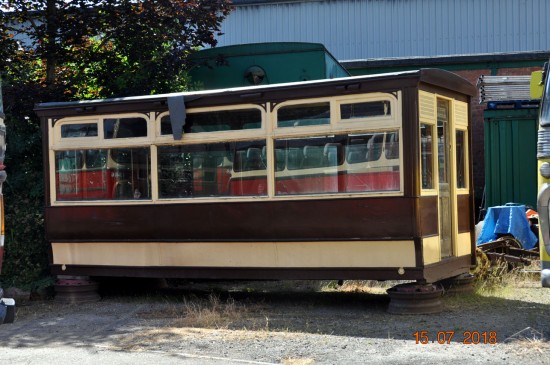