Posted on Thursday 22 November 2018 by Gareth Prior

Croydon is the location for today’s instalment of Picture in Time as we take a look at one of the early advert liveries on CR4000 2546.

In this image we see 2546 just arriving at New Addington on 4th July 2000 – just a few months after public service has begun. This location today is very much the same as seen in this photo although the ballast isn’t nearly as clean! The roller destination blinds have already been amended for its return trip to West Croydon – at this time all trams from New Addington ran around the central Croydon loop, a service was has returned during 2018 following a recasting of the Tramlink timetable.

2546 is in an all over advert for the Whitgift Shopping Centre which had been applied in November 1999, well ahead of the opening of the system. 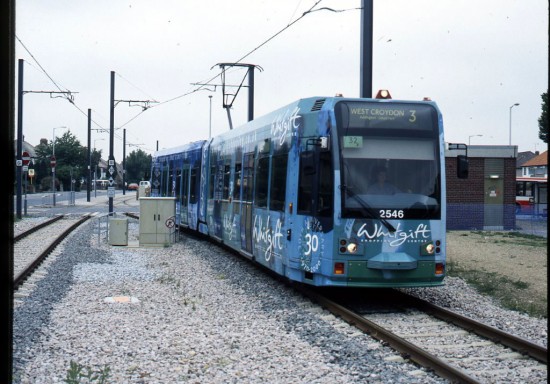