Posted on Sunday 4 November 2018 by Gareth Prior

Another week, another new advert on Manchester Metrolink. This time around the tram chosen is 3007 with the advertiser being National Geographic’s Mars 2 programme. Images from the series feature on the advert which is – once again – a full vinyl wrap (save for the end of the tram which retains fleet colours) including contravision on the windows. This isn’t the first time that 3007 has carried an advert with it having previously been in an advert for Crunchie. 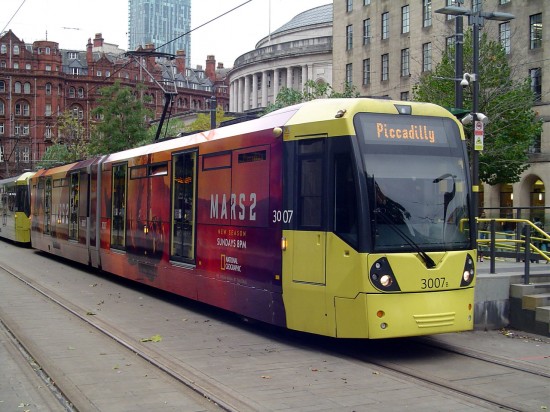 3007 is seen here as the front part of a double unit heading to Piccadilly at St Peter’s Square. A recent campaign has been launched to rename this stop Peterloo as a result of the massacre which took place at St Peter’s Field in 1819 and has recently been thrust into the limelight by the release of a new film. (Photograph by Dave Elison)