Posted on Tuesday 28 August 2018 by Gareth Prior

One of the most popular trams of the past 30 years in Blackpool is the feature of today’s Picture in Time – Princess Alice herself, Open Top Balloon 706.

As is well known 706 was rebuilt into open top condition – although not a restoration as such with many more modern features included – in time for the 1985 centenary after the tram suffered damage in a collision at Pleasure Beach on 22nd July 1980. Returned to service in 1985 706 was completed in an original green and cream livery style and also received its now iconic name “Princess Alice” in a special ceremony. It also received side adverts for the Fylde Tramway Society and was running with a Pantograph.

This photo is showing 706 at Fleetwood Ferry at the inaugural Tram Sunday event in 1985 and seems to be very popular with enthusiasts and photographers. 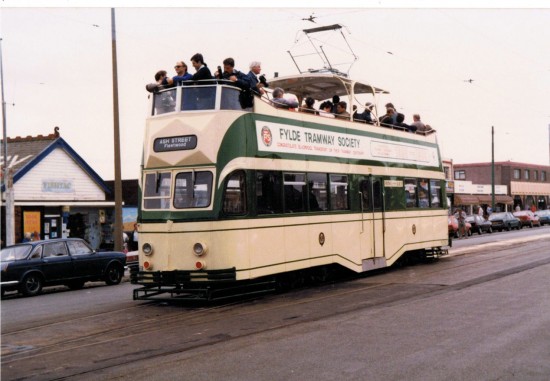