New fares for a new era in the West Midlands

From Sunday 24th June Midland Metro will be no more with the newly named West Midlands Metro coming into being as part of the new in-house operating contract for Transport for West Midlands. As well as an all new brand – the first details of which can be summised from the first publicity released – there will also be a new fares structure, including Metro only day tickets bringing the travel of a day exclusively on the trams down.

Midland Metro’s last day will be Saturday 23rd June after which the operator becomes Midland Metro Limited, taking over from National Express who have run the system since opening. New fares will be introduced across the line from the first day of the West Midlands Metro and unusually for times when we report on new fares this doesn’t actually mean increases, in fact in some cases it means it will be cheaper to travel by tram!

The big news is the introduction of Metro only day tickets which will offer a better value option for customers who are only using the Metro for a day. There will be a ticket which covers you at any point of the time and another which can be purchased after 0930 Monday to Friday and at any point on weekends and Bank Holidays. The peak version will cost £5.50 for adults (£4 for children) is using cash or contactless and £5.40 (£3.90) for anyone using the Swift card. And if travelling off peak this version of the ticket will be £4.00 (£3.00 children) for cash/contactless and £3.90 (£2.90 child) on Swift.

Previously if you wanted a day ticket you had to purchase one which also covered you on local buses and would have set you back £5.20 off peak and £6.70 at peak times. These tickets will still be able to be purchased but the extra option of the Metro only ticket means that there is a cheaper option now available.

The branding on the new fares information shows that the days of pink (or magenta if you prefer!) will be over for West Midlands Metro with blue the presiding colour from now on. It is anticipated that for launch day there will be at least some of the trams revealed in a new livery as we say goodbye to the Network West Midlands livery.

There will also be a new website with http://www.westmidlandmetro.com being the new home of information for anyone using the trams between Birmingham and Wolverhampton (limited information is currently available on the website with the promise of the full website being available from Sunday). 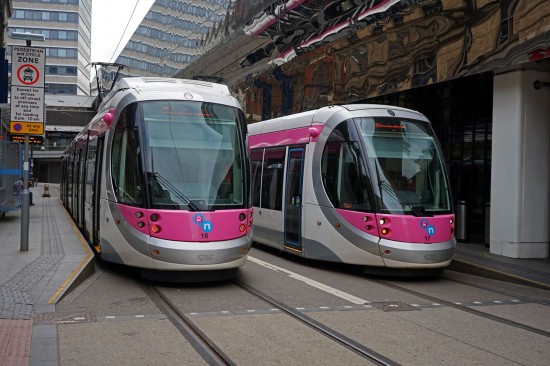 18 and 17 are seen on 19th June 2018 at Grand Central in the current livery. Just what will the new look be from Sunday 24th June? (Photograph by Andy Walters)