MER trailer 54 to be returned to service

With work on the joint volunteer/paid staff restoration of MER Ratchet Car 14 coming to a conclusion you would be forgiven to think that those involved would be looking for a rest but far from it as they have announced their next project – the return to service of Trailer 54, for the first time since 1971! Work will start shortly on the bodywork with the trailer moved this week to Laxey Car Sheds where this will take place.

54 was built in 1893 and last ran on 16th August 1971 when it made two return trips between Derby Castle and Laxey – appropriately hauled by the aforementioned 14. Since then it has been stored at Laxey (until 2002), Homefield Bus Garage (2002-2009) and then Derby Castle (since 2009) with the prospect of a return to service seemingly not looking likely – until now that is!

As the Manx Electric Railway’s staff are now completing engineering works to Ratchet Car 14 the volunteer team will be turning their attention to the bodywork of 54. The bogies and associated brake rigging will then be refurbished by MER engineering staff. It is planned that the trailer will be released back in service in time for the 2019 Heritage Transport Festival and will be completed in its current livery of red, white and teak. 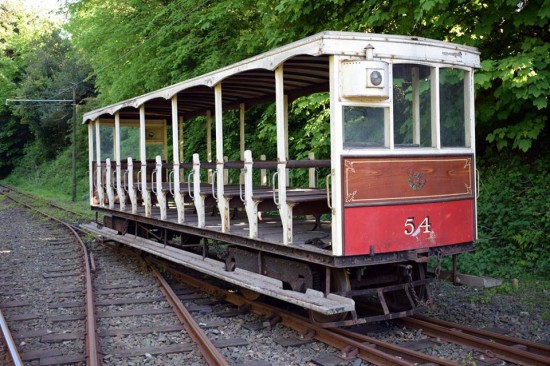 54 stands outside Laxey Car Sheds following its recent move for a start to be made on returning it to service for the first time in nigh on 50 years. (Photograph courtesy of Manx Electric Railway Online)