Back to Europe for this image from around the world. This time we are in Dresden, Germany.

A Tatra T4 from the batch built between 1973 and 1984 is seen on 21st May 2003 as it crosses the Augustusbrucke – over the river Elbe working route 11 to Zshertnitz. This image actually shows two of the trams which the first identified as 224 205 but the second is unidentified. Dresden had the second biggest order of T4s ever (only beaten by Leipzig) with 572 of this class of tram built between 1967 and 1984. Today Dresden has modernised with the Tatras replaced by a new generation of low floors trams. 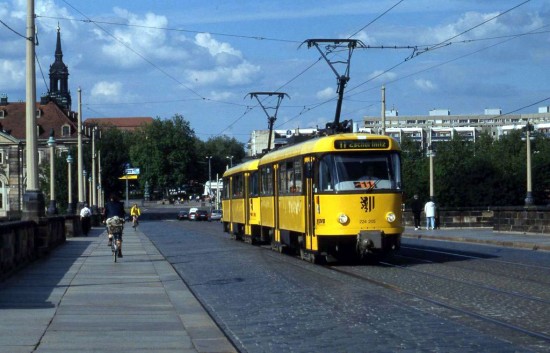