Posted on Tuesday 12 September 2017 by Gareth Prior

In this edition of Picture in Time we once again venture to Eastbourne for a look at the Modern Electric Tramways operation on the Sussex coast before they moved to the more familiar location today of Seaton. The tram featured is no. 6.

This tram has featured in this series several times over the years so we have covered its history many times before. However, in case you haven’t read it before or are new to the series, basic information on 6’s past is included here. When this tram was photographed on 7th April 1964 it had been rebuilt for the second time two years previously which included the addition of the two small saloons on the lower deck as clearly seen here. The tram had actually started off life as a single deck toastrack tram in 1954 with its first rebuild to a double decker coming in 1956. 6 remains in service today at Seaton – in a very similar livery – but was rebuilt again in 1989 which saw the tram return to its 1956 condition of a fully open crossbench lower deck.

As mentioned above the below image was taken on 7th April 1964 and shows 6 ready to embark on a another journey whilst standing at the terminus. Note that the track here just ends. 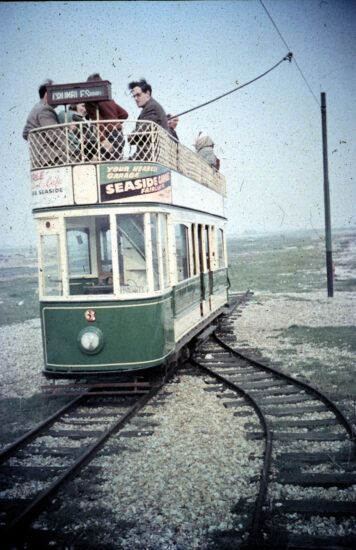