It is a wet day on the Isle of Man in today’s edition of Picture in Time with a view of a motor and trailer from 1992.

The motor in the frame is Tunnel Car no. 5 built for the Manx Electric Railway’s Laxey extension in 1894 by G F Milnes. At the time this photograph was taken – 1992 – the car had been in service for almost 100 years and had spent 60 of those years with non-standard 2+1 seating instead of the usual longitudinal seating of the other Tunnel cars (except for 7 when that was rebuilt earlier this century). At this time it was in a pretty standard MER livery with the Manx Electric Railway Co Ltd legend. It is 26th August 1992 when 5 was caught at Derby Castle on a rather wet day with its accompanying trailer seeing the shutters down to protect any would be passengers from the rain if they chose to take in the bracing elements for a trip to Ramsey. 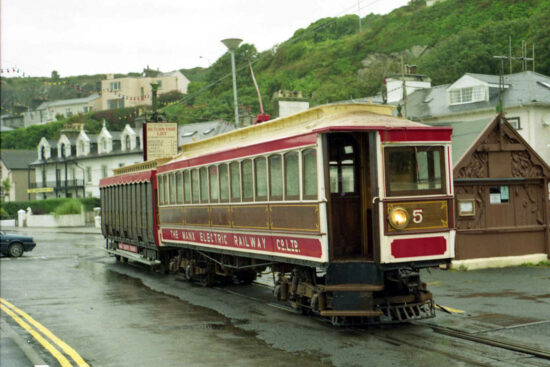