Posted on Thursday 15 June 2017 by Gareth Prior

We have a busy scene in Blackpool for our latest delve into the archives in this instalment of Picture in Time.

We are at North Pier on 16th August 1981 as three trams meet with their respective journeys. Starting on the left is Twin Car 676+686 which, according to its destination blind, seems to be terminating here from the north although it looks as if the conductor was hedging his bets with Harrowside peeking below. Then on the centre track is the first of two Balloon Cars in the form of the last built 726. This tram has terminated with a special – presumably from Pleasure Beach – but is still awaiting both its destination blind and trolley to be turned for its next trip. The scene is completed by another Balloon Car with 704 running through with a service to Fleetwood. All three trams carry trolley poles.

Today all three trams survive although none are operational. All can now be found stored at Rigb Road Depot with the Twin set and 704 under the auspices of the Blackpool Heritage Trust with 726 having recently arrived home under private ownership. 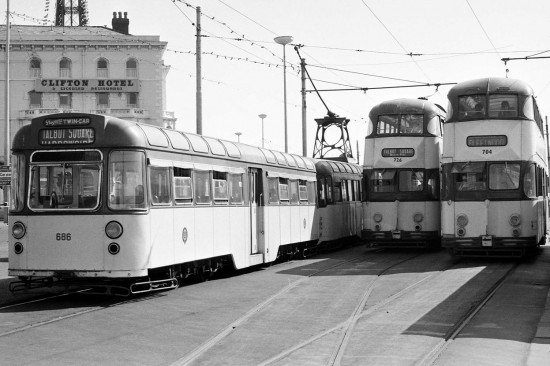