Posted on Wednesday 5 September 2012 by Gareth Prior

Another historically significant T68 has been withdrawn from service with the “Royal  Tram” 1010 running its last journeys on 2nd September – becoming the eighth of the initial 12 to end its Metrolink career.

1010 was the tram that was chosen to carry Her Majesty the Queen and the Duke of  Edinburgh when they officially opened the Manchester Metrolink system on 17th July 1992.
It was then named Golden Jubilee in 2002 to commemorate this event as a result of this Royal link. As mentioned above it was taken out of service following a day on the Bury to Piccadilly route.

Eight of the T68s have now been withdrawn from service with another four expected to be taken out of use imminently. This will then conclude the initial withdrawals although the
remaining 20 T68s and T68As will also be taken out of service by 2014. The advice to anyone wanting to sample the original Metrolink vehicles is get to Manchester as soon as you can because once they’re withdrawn from service that’s it! 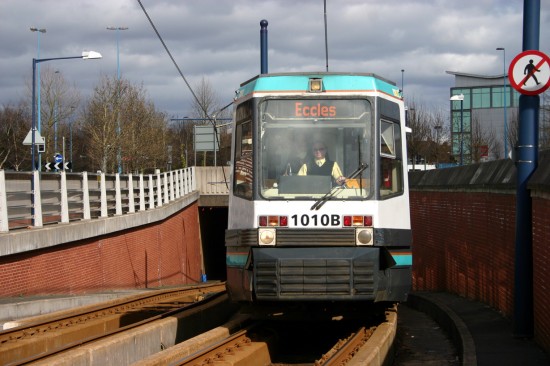 The eighth T68 to be withdrawn has been 1010. This view shows the tram approaching Eccles on 28th March 2010. (Photo: Gareth Prior)