Posted on Wednesday 5 September 2012 by Gareth Prior

Unfortunately there were further delays to Manchester Metrolink services through Manchester City Centre on Tuesday 4th September because of overhead line damage. This
damage was caused by scaffolders working on the Primark Building on Market Street.

It is believed that at least one pull off rope near the Market Street curve was damaged  probably due to the proximity of the erected scaffolding which, as the photo provided below shows, was rather close to some of these.

The delays started from approximately 1930 whilst engineers repaired the damage and during this time services from Bury and Oldham were terminated at Victoria with trams from Altrincham, Eccles/MediaCityUK and St Werburgh’s Road running into Piccadilly Station. A replacement bus shuttle was provided between Fairfield Street and Corporation
Street. Services had returned to normal by the start of service on Wednesday 5th September. 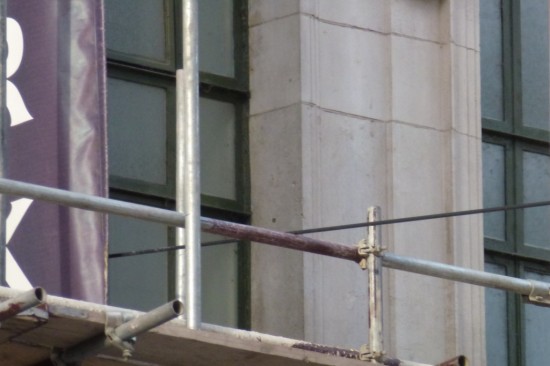 The proximity of the scaffolding to the pull off rope at Market Street is seen here. (Photo; Steve Hyde)