Another edition of Picture in Time takes us across the Irish Sea to the Isle of Man for a photo from the Manx Electric Railway.

2017 is the first time in almost 20 years since Crossbench no. 16 has been seen in the standard Manx Electric Railway colours following its repaint from the nationalised green livery over the winter but this image was taken a long time before the car had received a lick of green paint. We are in August 1963 at Laxey Station with a fairly busy scene as 16 with an unidentified trailer during what is presumed to be a shunt move judging by the lack of passengers on board the tram and the fact that the trolley is turned for a northbound journey. On the left Snaefell Mountain Railway 5 can be seen whilst a southbound car set is also present albeit mostly out of view. 16 is in the pretty standard fleet livery and it retained the red livery throughout the nationalised era not actually receiving the green livery until 1998. 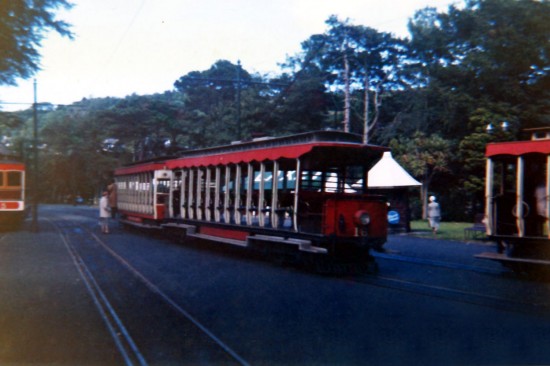