Back to the archives today as we take a look at another tram from Blackpool with this edition of Picture in Time featuring Blackpool Brush car 627.

Built in 1937 the tram originally carried the number 290 until the 1968 renumbering scheme saw it take the number 627. As 290 the tram was the historic last car to operate on the North Station to Fleetwood route in October 1963 and following the closure of the route it continued to operate on the remaining Prom route until it was finally withdrawn from service at the end of the 2004 season. A brief return to service did follow for one night only during the Farewell to Fleetwood tours in November 2009 but following that it was back to obscurity once again. Acquired for preservation by the Fleetwood Heritage Leisure Trust it spent time inside at Kirkham Prison where it received a repaint into a special Diamond Jubilee livery ahead of display at Pleasure Beach loop for the 2012, 2013 and 2014 illuminations (featuring three different liveries including the infamous Inkie graffiti style in 2013). It was removed from Pleasure Beach ahead of the 2015 illumination season and was moved for further storage at Rigby Road Depot but remains in the ownership of the FHLT.

In this photo we see 627 at Starr Gate in July 1972 with its twin destination screens set for a return journey to Bispham. As well as carrying the plain half green/half cream livery 627 also has roof advert boxes in situ. 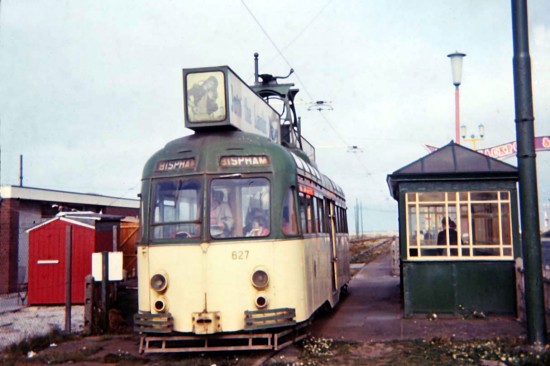