A trip to Croydon for today’s instalment of Picture in Time as we take a look at one of Tramlink’s original Bombardier built CR4000 trams – no. 2535.

2535 made the trip from Austria to arrive at Therapia Lane on Monday 30th November 1998 and became the first of the trams to be allocated to the Management Team rather than the Driver Training Team. As a result 2535 became the first tram into Croydon Town Centre and was also used mainly on gauging runs on the various branches of the network before they were handed over to the operations team for driver training.

In this view on 27th August 1999 2535 is involved in Driver Training as it comes off the flyover across the West Croydon to Sutton railway line. To add to the scene class 455/8 EMU 5821 is running alongside on a service to Sutton. Both vehicles are in defunct liveries with the tram carrying the original Red and White fleet colours whilst the EMU is in Network South East livery. 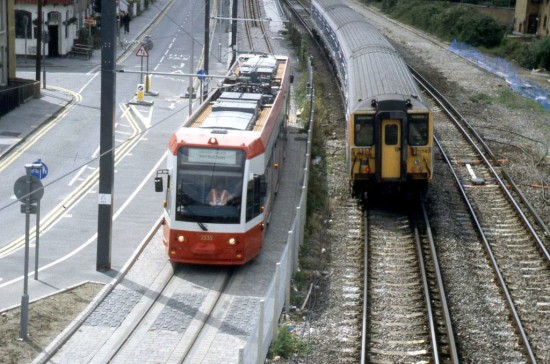