Since the end of the traditional tramway operation in Blackpool in November 2011, great efforts have been taken to rebuild a collection of trams representing all of the different types of tramcar which formed the running fleet in the final years of the tramway (and some from much earlier) – with one noteworthy exception. With only two Jubilee cars ever built and both preserved by other organisations, it was uncertain whether either would ever become a part of the Blackpool heritage fleet, but happily, that is exactly what has now happened!

Jubilee car 761 was one of the trams which ran on the very last day of the 2011 season and shortly afterwards it was moved to secure storage in Fleetwood, having been acquired for preservation by the Fleetwood Heritage Leisure Trust. When the need arose for the tram to be moved again, arrangements were made with Blackpool Transport and the Blackpool Heritage Trust for this unique car to be stored at Rigby Road, and it returned home in December 2013. This was merely a storage arrangement at this stage, agreed by both parties to help conserve this very valuable tram. Since then, there has been continued constructive discussion between both parties who have agreed that a tram as important as 761 really deserves to remain on the Blackpool tramway for good.

761 has now been officially handed over to the Blackpool Heritage Trust, ensuring that this creation of the Rigby Road workshops will be a part of the resident heritage collection forever! This is an event that many of us have long hoped for, and sincere gratitude must go to everyone who has made this possible, not least of all the tram’s previous custodians who ensured its survival at a time when this was by no means assured. Had this not happened then it may not have been possible to celebrate the addition of a Jubilee car to the permanent heritage fleet today. This also assures the class a secure future, with sister car 762 of course preserved at Crich and maintained in running order.

Thoughts will inevitably turn towards the future possibilities involving 761. It is hoped to restore the car in its original green and cream livery at some point and enable its operation on heritage tours, where its massive seating capacity will prove useful. This would follow a lengthy period of service in a variety of advertising liveries, culminating in the bright orange garb for Wynsors World of Shoes which it received in 2008 and still retains today. For now though, just to have another phase in the evolution of the Blackpool tramcar represented in the fleet is a wonderful development and one which deserves to be celebrated! 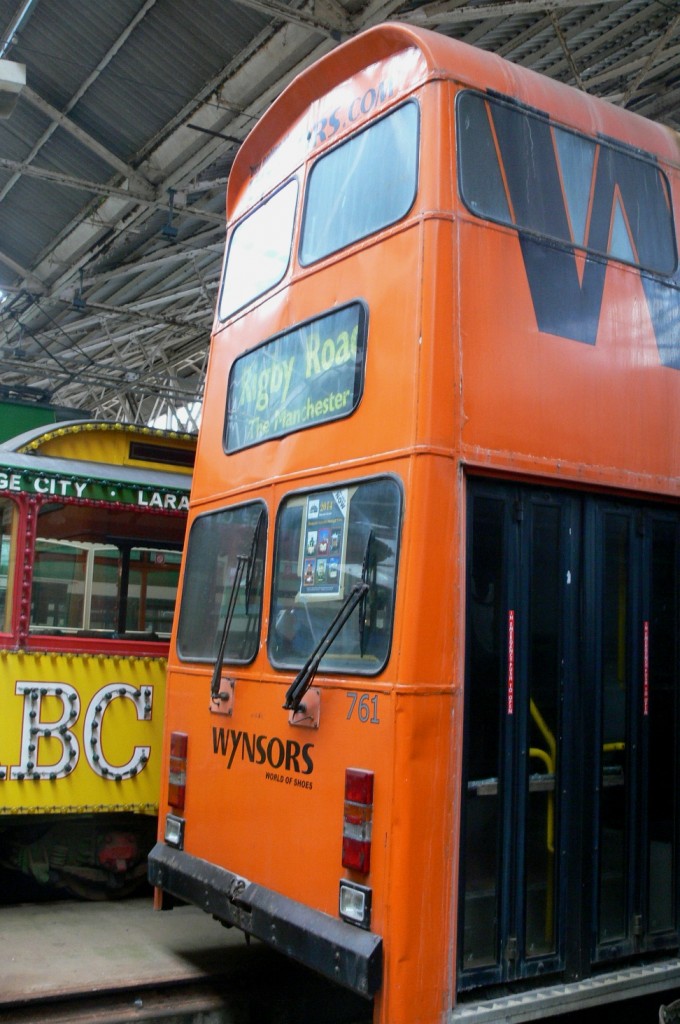 A recent view of Jubilee car 761 stored in the sanctuary of Rigby Road depot last year, prior to its recent ownership transfer. (Photo by Andrew Waddington, with the permission of the Blackpool Heritage Trust & Blackpool Transport Services Ltd.)