The 80th anniversary of the Brush Railcoaches is set to be celebrated in style with the news that two time winner of the British Trams Online Tram of the Year contest, 623 is to return home to Blackpool later this year for a loan period of operation. 623, which left Blackpool back in 2010 and has been running at the Heaton Park Tramway in Manchester since 2012, will make the relatively short journey to Blackpool later this year with the hope that it will enter service over the Tram Sunday weekend in July.

623, originally numbered 286, entered service in Blackpool in July 1937 and remained in service until 8th November 2009. Towards the end of its career on its home tramway it underwent a popular repaint into the Wartime Green and Cream livery and was often seen in use on the Tram Driving Experience. Acquired for preservation by the Manchester Transport Museum Society, operators of the Heaton Park Tramway, 623 departed Rigby Road Depot exactly seven years ago today on 6th May 2010. Initially it went on display at the Museum of Museums (alongside Balloon 702) before heading to Heaton Park where it entered service on 22nd January 2012. Although it spent all of 2016 out of service 623 returned to service at the Manchester Transport Museum Society 50th Anniversary event at the start of April 2017.

2017 marks the 80th anniversary of the Brush Railcoach and Blackpool Heritage Tram Tours intend to celebrate this special birthday in style. Refurbished 631 is already firmly established as part of the heritage fleet and it is planned that pioneer 621 will also be available for service from September following its Trams Magazine sponsored overhaul which has recently commenced in the workshops at Rigby Road. The visit of 623 will now be the icing on the cake providing a third member of the class in service.

The exact date of its departure from Manchester has yet to be revealed but it is hoped that it will be launched back into use in July. The centrepiece of the Brush Car 80 celebrations will be over the Tram Sunday weekend (15th/16th July) and the Tramway Anniversary Spectacular weekend in September.

The loan of 623 continues to cement the excellent relationships enjoyed by the UK’s heritage tramways and this will be the second tram owned by the MTMS to run in Blackpool this year (Ex-Towing Railcoach 680 remains on loan). 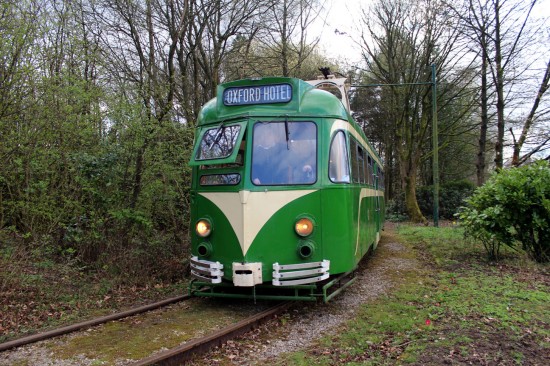 On 2nd April 623 returned to service at Heaton Park following a year out of use. It is seen here on that day running through the wooded section of the tramway. 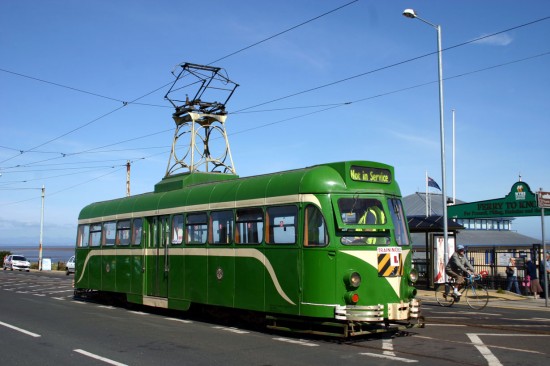 623 last ran in Blackpool in 2009 and is seen here on 10th September of that year resting at Fleetwood Ferry whilst being used for Tram Driving Experience. (Both Photographs by Gareth Prior)