Posted on Thursday 27 April 2017 by Gareth Prior

Last time out when we headed to Blackpool for Picture in Time we featured a couple of Balloon Cars and in this edition we do exactly the same although this time we are 25 years earlier in 1981.

This image, taken on 16th August 1981, takes us back to a very different time for the Blackpool Tramway with an incredibly busy scene at Pleasure Beach and although we mainly feature two Balloon Cars they are not alone in the photo. On the right is 710 carrying the standard 1970s Green and Cream fleet livery including side between deck adverts, it has stopped at the old loading stop with passengers boarding for a journey to Fleetwood as the Inspector looks on. Meanwhile the other full tram we can see is fellow Balloon 724 (again in standard livery and between deck adverts) which is waiting on the loop directly behind a Boat Car. A Twin Car can be seen on the mainline in the distance and the scene is completed by another tram proudly displaying the Corporation crests on its panelling. 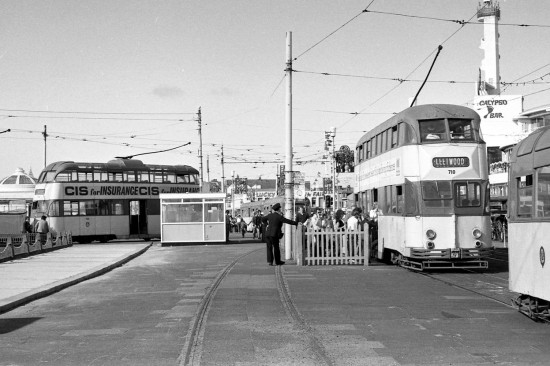