Posted on Saturday 26 November 2016 by Gareth Prior

We are off to London for today’s Picture in Time as we take a look at one of the original trains which operated on the Docklands Light Railway.

This photo shows no. 04 one of 11 P86 stock trains built by Linke Hofmann Busch in Salzgitter in 1986. The train is running a service to Island Gardens as it is seen approaching at Poplar Station from Stratford. The P86 trains formed the original fleet of trains for the initial Docklands Light Railway which did not include the Bank branch and as such did not have the safety features as seen on all subsequent vehicles. As a result following the opening of the line to Bank they were not able to operate here and were then sold to Essen, Germany where they were converted for use on the Stadtbahn. 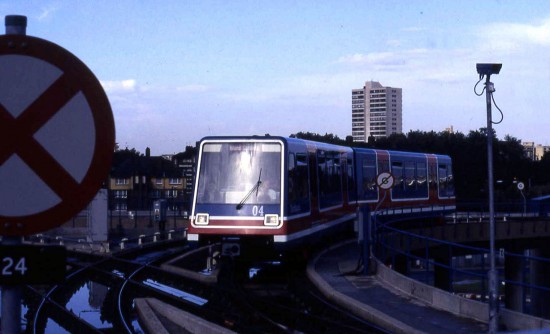