Posted on Friday 30 September 2016 by Gareth Prior

Over the weekend of 24th and 25th September the Blackpool Tramway celebrated its 131st anniversary in style with an Anniversary Spectacular which saw an intensive tram service in operation alongside depot tours and tram displays at Rigby Road Depot. This review of the event actually starts on Friday 23rd September when a special afternoon heritage service ran.

A special four hour heritage tram service ran between Pleasure Beach and North Pier from 1400 on this day. With sunny – if not a little chilly – weather conditions the two trams selected for this duty were Open Boat Cars 230 and 600 and they operated at a 20 minute frequency. Healthy loadings were noted throughout the afternoon with many enthusiasts seemingly already in town for the weekend’s festivities.

The evening of course saw Illumination Tours with the light switched on at 1930. Five different trams were used on tour duty during the evening which included two open cars. As is usual the first tour was in the wheels of the Western Train but then arriving at Pleasure Beach to run tour was a pleasant surprise in the form of Marton Box 31. The third tram was Frigate 736 with Balloon 717 number four and the last tour car for the evening was Boat 600. With all five trams having run one tour the Western Train, 31 and 736 all then ran an additional tour. From early evening Balloon 700 had also been out on specials.

A normal Gold weekend in Blackpool sees a timetable published with six allocated trams running a specific diagram but for the Anniversary Spectacular although a timetable was produced it was more like the old days of not knowing which tram would turn up at what time with many specials also running. Rather than six heritage trams in action no fewer than 12 were used on the normal heritage service during the day on this Saturday including Modified Balloon 718, still running in its ghostly white livery.

Starting the day off at Bispham the first northbound arrival was Twin Car 272+T2 (with the trailer leading) working through to Little Bispham and this was soon followed by Balloon 723 which terminated at Bispham. Having hopped on board the Twin a trip through to Pleasure Beach showed many of the other trams in action for the day with Balloon 717 on the first Fleetwood trip of the day, Boat 230 heading north to Little Bispham, Boat 600 also running to Little Bispham and Railcoach 680 to Cabin (passing four heritage trams in service on a journey from Bispham isn’t too bad for the start of the day is it?). Once at Pleasure Beach a number of trams were stabled on the loop awaiting their turn to form a journey with Modified Balloon 718 at the front of the queue ready to run to Little Bispham. Also on the loop at this stage were Boat 227, Balloon 715, Marton 31 and Balloon 701. The twelfth tram in normal heritage service was Centenary 648.

Away from the main heritage service Balloon 700 was in use on the depot shuttle service between Hopton Road and Starr Gate Depot running each hour to link the two depots. Brush 631 – which had been on static display at Rigby Road – was also used on one trip between Rigby Road and Starr Gate running empty back to Rigby Road straight away. Meanwhile Balloon 719 was stabled at the North Pier/Tower siding being used as the shop throughout the day.

There is no getting away from the fact that the day was marred by the fire on Twin Car 272+T2 close to Gynn Square shortly before 1200 (see separate story for more on this incident) which saw the tram service – both heritage and core Flexity service – suspended for a time between North Pier and Bispham. This led to a number of short workings with some Flexitys seen running to Little Bispham and Thornton Gate in an attempt to get back towards timetable. Balloon 715 also suffered a problem which saw it stabled on the siding at North Pier for much of the day out of service whilst Modified Balloon 718 was also out of action for a time staying at Pleasure Beach but its problem was soon fixed and it completed the day in service.

Down at Rigby Road Depot the Western Train was displayed on Blundell Street with the depot fan home to Coronation 304, Brush 631 and Twin Car Trailer 681.

The day ended with Marton Box 31 running the last northbound trip with Centenary 648 on the final journey to Pleasure Beach. The trams then started to return to depot (including 719 from its shop duties) with the exception of Balloon 715 which was unable to access Lytham Road and so headed off to Starr Gate where it was stabled for the rest of the weekend.

Saturday evenings are always the busiest for Illumination Tours and six trams were used during the night. The Western Train started things off again and was followed by Bolton 66 and then the Frigate all of which ran through to Little Bispham. The next three trams were all turned at Bispham and these were Modified Balloon 718, Railcoach 680 and Balloon 717. With the exception of 680 all trams ran a second tour with the Western Train also on duty for a third trip.

Day two of the Anniversary Spectacular saw B fleet Balloon 711 operate the first journey north to Bispham with other early trips also seeing the Western Train (Little Bispham), Balloon 723 (Little Bispham), Frigate (Little Bispham), 717 (Fleetwood) and 600 (Bispham) in service. It was another busy scene at Pleasure Beach with the respective loops led by Twin Car 675+685 (ready to head to Fleetwood) and Box 40. Other trams in situ included Marton Box 31, Modified Balloon 718, Railcoach 680, Boat 227 and Balloon 701. The day also saw Bolton 66 and Centenary 648 in action meaning that the standard heritage service was operated by 15 trams in one day – surely some kind of record for the upgraded tramway?

Again the timetabled service was supplemented by specials throughout the day running from Pleasure Beach as directed by the Inspector which meant for much of the day you didn’t have to wait much more than 5 minutes for a trip on a heritage tram. Highlights of the day included a couple of Fleetwood journeys for Twin Car 675+685 (on the first on its return to Pleasure Beach the tram seemed to reach Cabin where it then reversed to Little Bispham before heading back to Pleasure Beach again), Marton 31 worked to Fleetwood during the morning with B fleet Balloon 711 also making a couple of journeys to the northern terminus of the tramway and Balloon 723 was also used on some Fleetwood trips; one of which started at North Pier following disruption on the tramway.

Unfortunately the day was again marred by an incident involving a heritage tram with Boat 600 derailing on the exit from the inner loop at Pleasure Beach blocking the mainline and causing further disruption to the core service. This meant that no trams were running between Starr Gate and North Pier for a time (Flexity services were extended to Central Pier/Manchester Square before the full line was reopened). Fortunately with so many trams being out there were a number of heritage trams which were situated north of North Pier which meant a service was still able to be operated. This allowed the unusual sight of trams terminating at North Pier from the north with Balloon 723, Boat 227 and Box 40 all using the crossover to return north.

The line-ups at Rigby Road saw Brush Cars 631 and 632 joined by Engineering Car 754 on Blundell Street with the depot fan home to recently arrived Balloon 708, Modified Balloon 709 and The Rocket.

With 600 rerailed and then returned to depot under its own power all further heritage departures from Pleasure Beach on this day used the outer loop with Balloon 701 on the last journey of the day to Bispham.

The evening Illumination Tours were again started by the Western Train but with the Frigate in use on a Private Hire Modified Balloon 718 and Balloon 701 were also used for the first few tours of the evening. The Frigate did then operate a public tour with the Western Train and 701 also operating a second tour each to end another action packed weekend of heritage tram operations.

There is no getting away from the fact that the weekend was marred by the Twin Car 272+T2 fire and Boat 600 derailment which caused disruption not just for enthusiasts enjoying the Anniversary Spectacular but also for normal passengers trying to travel on the Flexity service. It was a real shame that these two events did cause disruption as it had been shaping up as being an excellent weekend with probably the best use of specials on the tramway since upgrade helped in no small part by the dedicated staff and volunteers crewing the trams. True there were no surprise trams added to the mix a la 723 in 2015 but who can quibble with 15 different trams in use on one day?

* A full Photo Gallery on the weekend (starting from the Thursday with the Hovertram’s arrival) will follow on British Trams Online soon. If your Editor manages to get his finger out it will be uploaded this weekend if he is lazy and doesn’t it won’t! 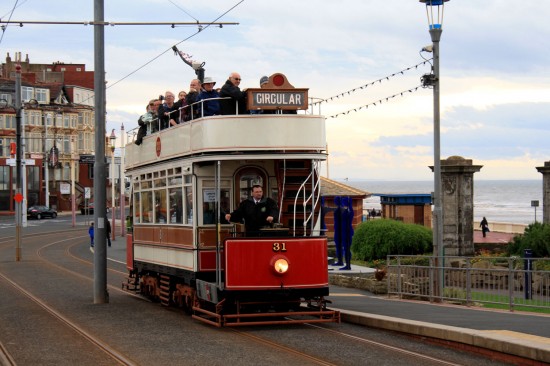 Marton 31 climbs the hill at Gynn Square with a northbound service on the Saturday. 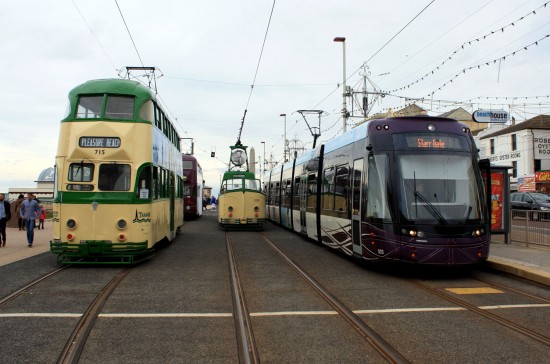 A busy scene at North Pier with Boat 230 running through the centre line for Little Bispham with shop tram Balloon 719 and Balloon 715 on the siding. Flexity 003 completes the scene at the southbound platform. 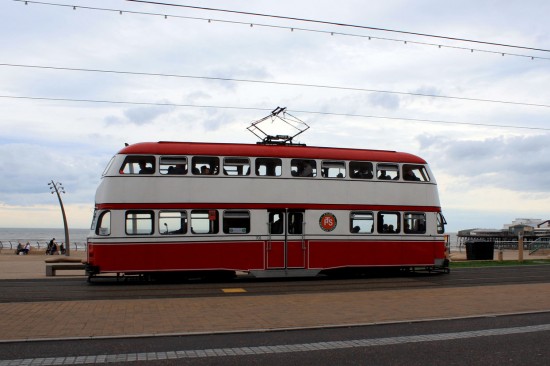 A side-on view of Balloon 701 whilst working on the approach to North Pier. 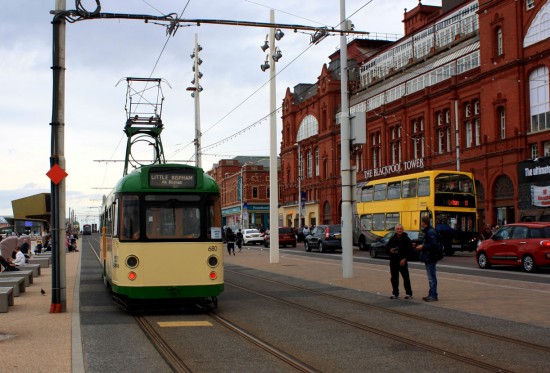 Railcoach 680 heads away from the camera outside Tower as it too heads north on the Saturday. 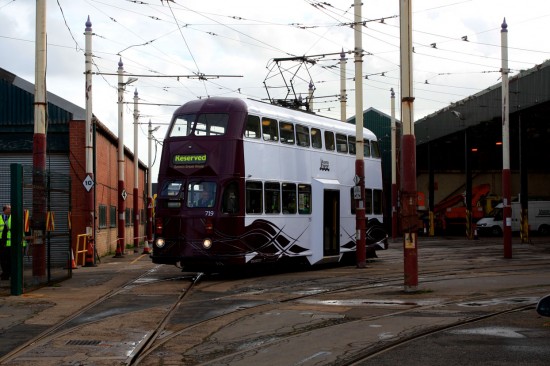 Balloon 719 leaves Rigby Road at the start of the Sunday to resume its duties as the shop at North Pier. 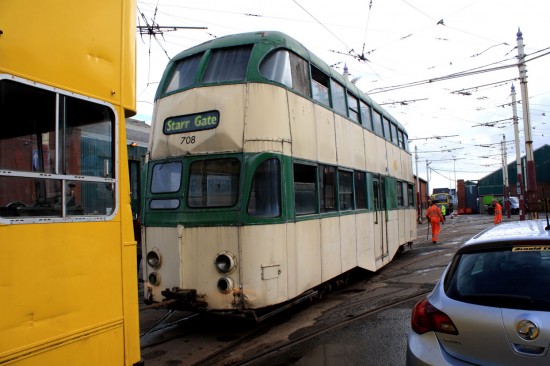 Balloon 708 is shunted to form part of the depot display with Engineering Car 754 doing the honours. 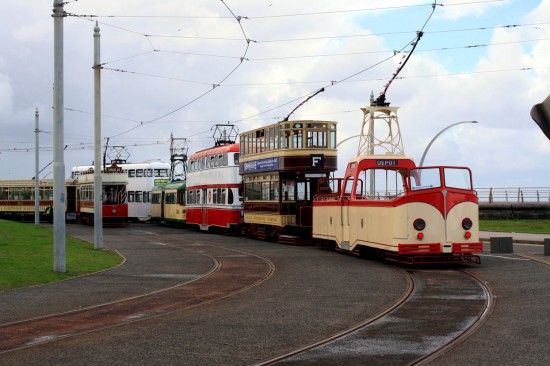 A busy scene at Pleasure Beach loop as another day begins. Boat 227 brings up the rear of the line-up of trams. 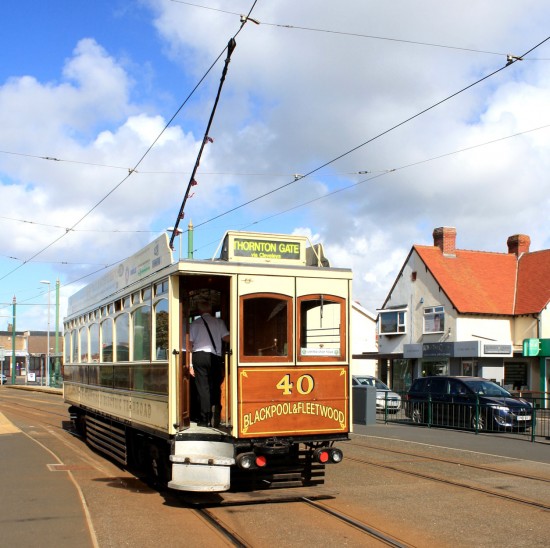 Box 40 heads off to Thornton Gate in this view taken at Cleveleys. (All Photographs by Nigel Pennick)