Posted on Sunday 25 September 2016 by Gareth Prior

Our latest trip to the archives heads to Blackpool as we take a look at one of the many advertising liveries carried by the Centenary Cars over the years. With Nottingham Express Transit 206 having recently received vinyls for Jet2.com we thought it was an apt time to look at Blackpool Centenary 645 when it too carried vinyls for the same sponsor.

Centenary 645 was delivered to Blackpool in September 1987 entering service a month later and it soon settled into its regular operating pattern of year round use including the all important winter service when it was used as an one person operated tram. Delivered in the standard green and cream livery 645 retained these colours until 1993 when it received its first all over advert and by the time it received the vinyls for Jet2.com it has carried six adverts in total (with Jet2.com being the seventh and final). The Jet2.com advert was applied in time for the start of the 2009 season but this was the only season it carried these vinyls with it returning to use in the 2010 season in a plain red livery with the addition of white areas on the end panels.

This first image shows 645 at Church Street, Fleetwood on 8th September 2009 whilst working through to Fleetwood. 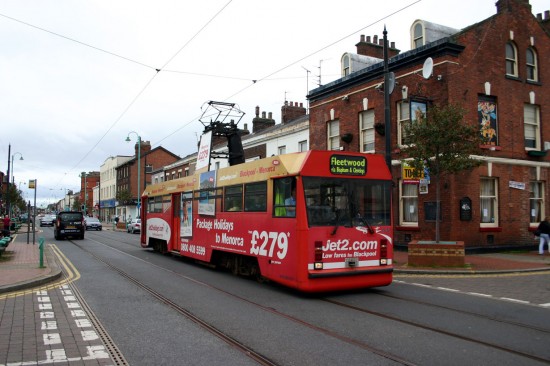 And in the second photo we take a look at 645 at Pleasure Beach on 11th September 2009 with a side on view giving a good look at the advert livery. 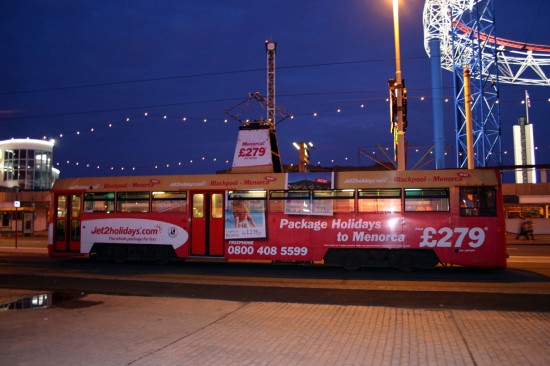