Welcome home to the Hovertram!

Following on from the surprise return of Blackpool Balloon car 708 to Blackpool on Wednesday 21st September, the following day saw an even more exciting return in the unmistakable shape of the illuminated Hovertram 735. As previously announced, this tram has come home on a long-term loan from the North Eastern Electrical Trust having spent the last few years at their Sunderland premises.

735 had initially left Blackpool for a new home in Beith, Scotland, but was later sold again to NEETT and moved to the North East Land, Sea & Air Museum a couple of years ago. Last used in passenger service in 2001 before it was retired due to its generally poor condition, the Hovertram has nonetheless remained largely intact since and unlike many trams which have seen mixed fortunes since being sold off, it has remained undercover ever since leaving Rigby Road. These facts should make a future restoration much easier, although it should be stressed that a considerable amount of work will still be required if this iconic tram is to run again.

Calkeld’s Heavy Haulage provided the transport for the Hovertram’s journey home. It was extracted from the depot at Sunderland and loaded up for a 1500 departure, and arrived back in Blackpool in the early evening where the low loader was stabled on Blundell Street ready for its precious cargo to be unloaded. This task was carried out efficiently once the trams required for illumination tour duties had left the depot, to allow the process to be carried out unobstructed, briefly seeing it reunited with the Western Train 733+734 which it ran alongside every autumn for so many years. As darkness fell, the car was shunted inside the shed with assistance from the Unimog. Welcome back 735, its great to have you back where you belong! 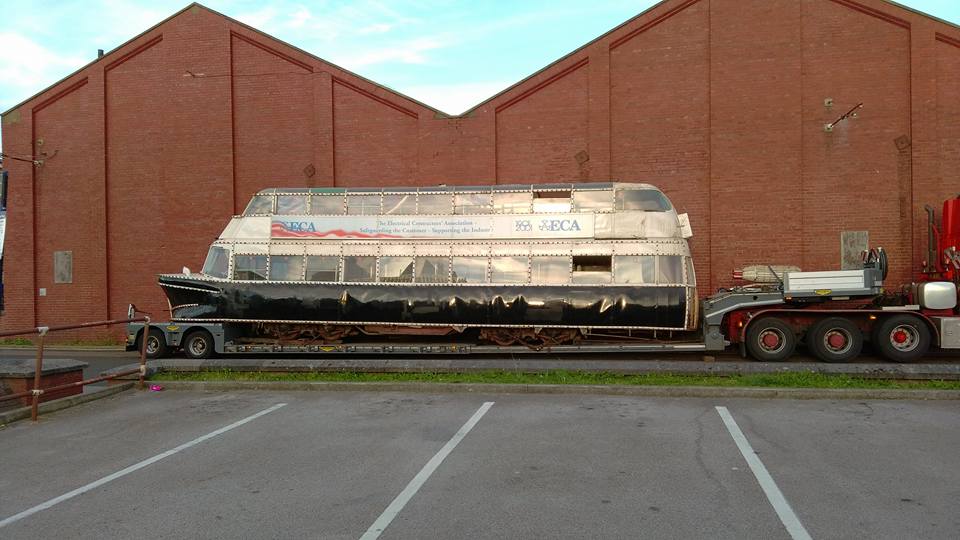 Welcome home. A long shot of the Hovertram on Blundell Street waiting to be unloaded and make contact with Blackpool tracks for the first time in ten years. Notice the trucks are visible thanks to the absence of its 'sea wave' skirts. (Photo by Gareth Prior)