We have a double dose of images today for our latest installment of Picture in Time as we head back to Blackpool and take a look at Twin Car 677+687 in action in 1981.

This Twin Car came into being in the early 1960s with the motor – then numbered 277 – being converted from a second series English Electric Railcoach in 1960 – entering service in the July. The trailer – originally numbered T7 was delivered to Blackpool in late 1960 and was first used in service in April 1961. As with all Twin Cars originally the two were not initially permanently coupled with their relationship not confirmed until July 1970. Set 7 was one of two Twin Cars to only ever carry green and cream and it was chosen for withdrawal at the end of the 2004 season. In 2007 677 was dismantled to allow for the full restoration of the Western Train which left 687 orphaned. The trailer is now part of the Fleetwood Heritage Leisure Trust’s collection and can be found at Wyre Dock where plans are being formulated for further attention to the vehicle.

Both of these photos were taken on 16th August 1981 and image number one is at a busy Pleasure Beach where the trams wait on the mainline behind a Boat Car with another Boat and a Balloon on the loop. 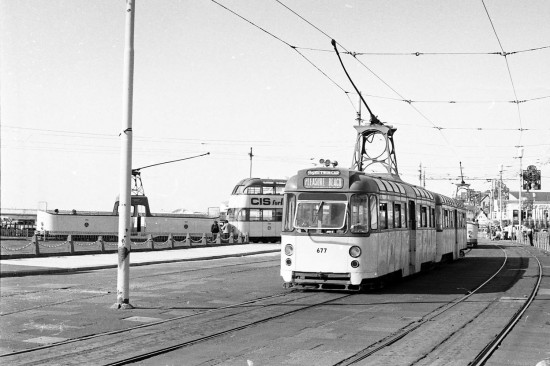 And then we are at North Pier/Talbot Square where we see the pair about to head back to Harrowside. 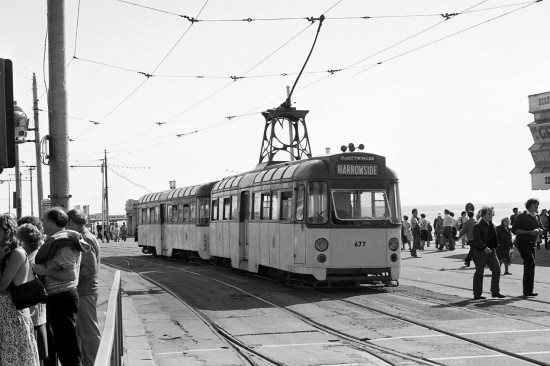