Across the Irish Sea we go to the Isle of Man for today’s installment of Picture in Time. We head back over 50 years to 1963 and find Winter Saloon 19 in action along with a trailer.

It was the August of 1963 when this photo was taken and Winter Saloon 19 is seen just outside of the Derby Castle terminus along with a trailer. The backdrop of this photo is much different than that you would see today with the Derby Castle complex still in situ (this was even before the ill fated Summerland complex was constructed) and 19 is carrying a darker livery than that we are used to today carrying the legends of MER and Manx Electric Railway.

Today 19 – which was built in 1899 – can still be seen running between Douglas Castle and Ramsey in the usual Manx Electric Railway livery of Red, White and Teak. 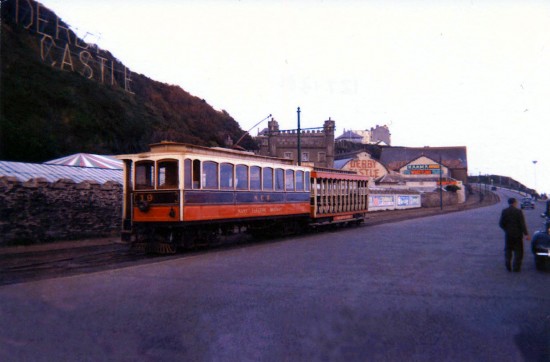