We are off to Manchester Metrolink pre-opening for the latest images in our Picture in Time series. It is February 1992 and the tram we are featuring for the second time is 1002.

1002 was delivered to Manchester on 16th October 1991 and it didn’t take long for it to be the first of the T68s to receive a sponsored name when it received stickers stating Manchester Arndale Voyager. Ahead of the opening of the system in April 1992 1002 carried passengers on two occasions – once in November 1992 when LRTA members travelled from Queens Road to Crumpsall and then again in February 1992 when Prime Minister took a trip to Bury – including a spell driving. 1002 spent several months out of service at the end of 1999 when it was involved in a collision at Piccadilly which resulted in half of the tram heading off to Washwood Heath for repairs. 2005 saw two further road trips – one planned and one not so. It first went to Wolverton for standard refurbishment works but then a little over two months after it returned to service it was involved in a collision at Corporation Street on 18th October 2005. The damage was so severe that 1002 was sent to Crewe (its third different off site works it has visited!) and did not return until 17th March 2006. The one other main claim to fame for 1002 was in November 2010 when it became the first LRV hauled onto the South Manchester Line for gauging trials.. The tram was then withdrawn on 18th November 2013 and lingered around Manchester for another 10 months before heading off for scrap on 19th September 2014.

Both of these photos were taken on 11th February 1992 and show 1002 at Victoria. In the first image it is approaching the Metrolink stop at Victoria. 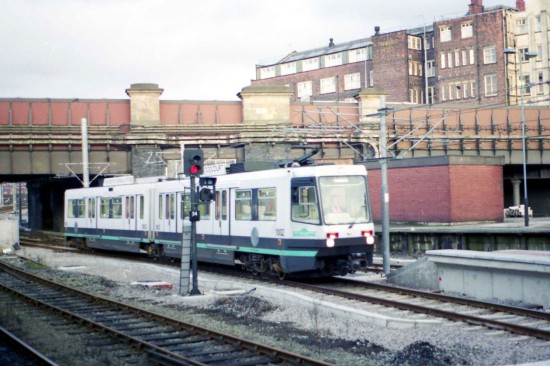 Whilst in the second view we see 1002 with company on the national rail network. A Pacer DMU heads away from the camera whilst a class 56 locomotive approaches on a freight service. 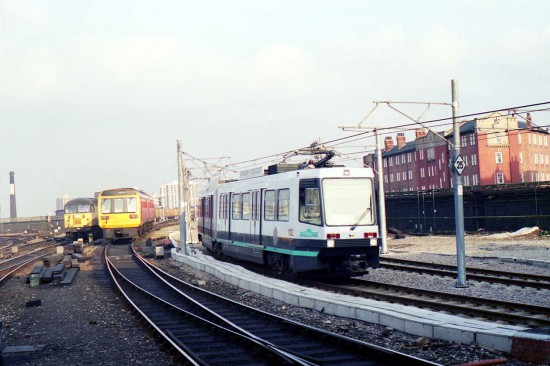