Welcome news from the Blackpool Heritage Trust is that Blackpool Balloon 723 has recently been admitted to the Paint Shop for a full repaint. The tram was re-activated as an extra attraction for last year’s 130th anniversary weekend, following the removal of its previous advertising vinyls for the Sands Venue. This exposed the green and cream livery beneath, but the removal of the vinyls unsurprisingly caused some paintwork damage.

Since then, 723 has seen occasional use on heritage duties and even managed a single appearance on illumination tours last year in its ‘scruffy’ condition! Its last outing was on the recent event on 28th February, but the tram has now moved into the Paint Shop in preparation for a much-needed repaint. This will ensure that the car remains a part of the operational fleet and should see much more use, having run infrequently since 2011.

It has been decided to retain the existing 1980s style livery which 723 previously adopted in 2008 at the request of an advertiser, the popular version of fleet livery being used as a backdrop for side panel adverts. Although due to its modern features such as trafficators and rubber bumpers, it is pleasing that this attractive livery will live on in the heritage fleet and the completed paint job should look fantastic! Whilst it may have been tempting to remove some of the car’s modern features, it is hoped that this will be retained in the long-term to illustrate another stage in the long operating life of the Balloon cars, bridging the gap between the more traditional 717 and 715, and the heavily modified ‘B Fleet’.

So far work has focussed on rubbing down 723‘s bodywork ahead of its repaint. No timescale has been announced for completion of the task, but at some point this summer the tram should be mark in service looking much smarter than it has done before in the light rail era. 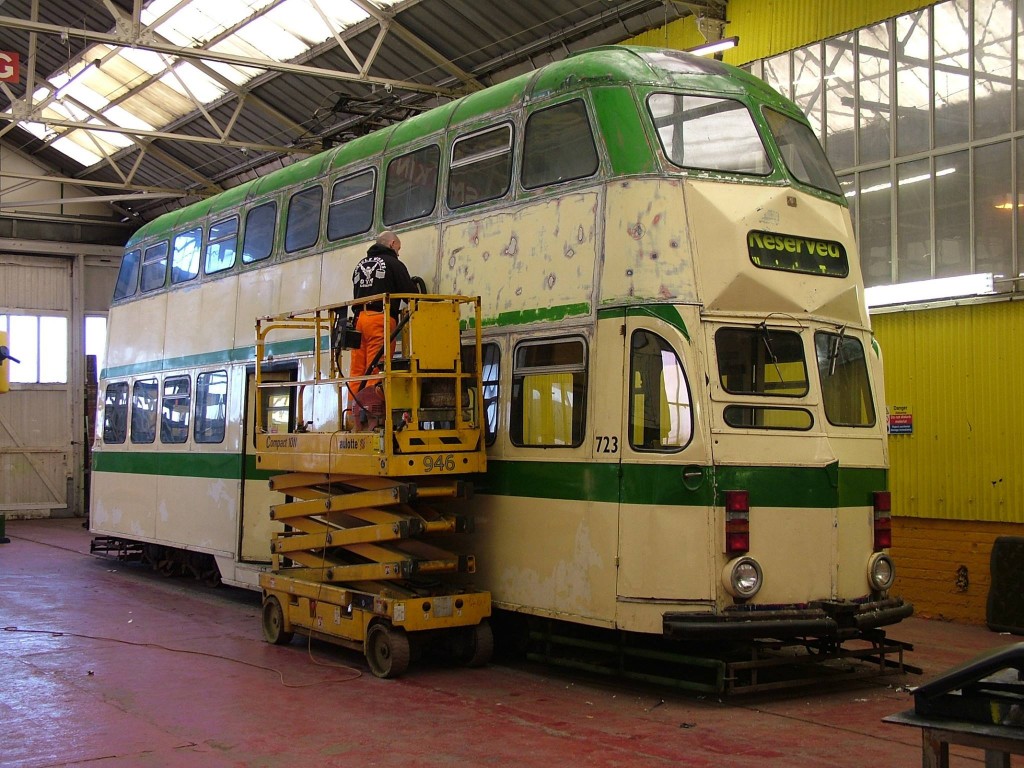 723 in the Rigby Road Paint Shop, where it is being rubbed down before being treated to a complete repaint in 1980s livery style. (Photo courtesy of the Blackpool Heritage Tram Tours Facebook page)