Posted on Friday 30 October 2015 by Gareth Prior

You probably didn’t need to be a rocket scientist to work out which tram we were going to feature in this week’s Blackpool based Picture in Time as we conclude our look at the main Illuminated feature cars with a view of The Frigate 736 in 1998.

The last of the feature cars to be built in the 1960s The Frigate entered service in September 1965 and was constructed from Pantograph 170. It was the third of the feature cars (after The Rocket and The Hovertram) to have a rear entrance when first built and soon settled into a regular season of operation during the Illuminations alongside its fellow head turners with limited use in daylight hours.

Our photo actually shows one of these rare daylight outings when on 17th July 1998 it was used on an enthusiasts tours to Fleetwood (along with the Western Train, which was seen on the same tour in our last Picture in Time). At this time it was sponsored by the band The Beautiful South and was still in its original shape. Later on in the same year it was to receive large fleet numbers on the bows. The Frigate was only to see use for a further three years being withdrawn at the end of the 2001 season which brought the Illuminated fleet to its lowest ebb.

But salvation was on hand and over 2003/4 the tram went through Blackpool Transport’s workshops and was rebuilt being unveiled in 2004 on a very wet night. On its return it looked different and now featured a side entrance but its distinctive horn remained. 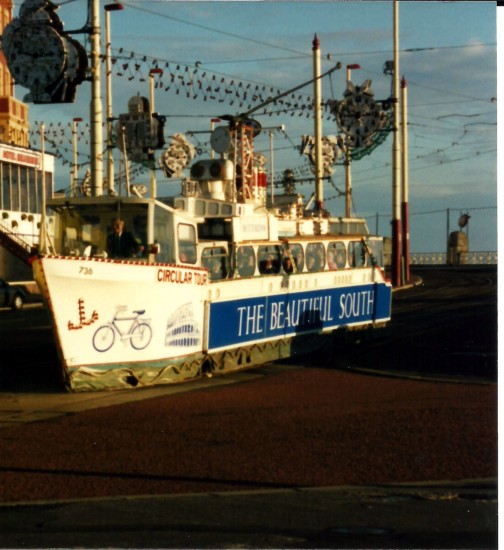