Posted on Thursday 10 September 2015 by Gareth Prior

And so it begins! This weekend marks the start of a hectic few weeks for the traditional trams of the British Isles with the launch into service of Liverpool 245 at Birkenhead (Saturday 12th September) whilst just across the Irish Sea on the Isle of Man it is the last operating weekend of 2015 for the Douglas Horse Tramway (last trams run Sunday 13th September). Read on below if you want to read the latest update of when and where you can enjoy a ride on a traditional tram at 13 different tramways in the British Isles…

Next Special Event: Last day of 2015 season – Sunday 13th September (to include various different trams in service and on display and a mini cavalcade at 1720) 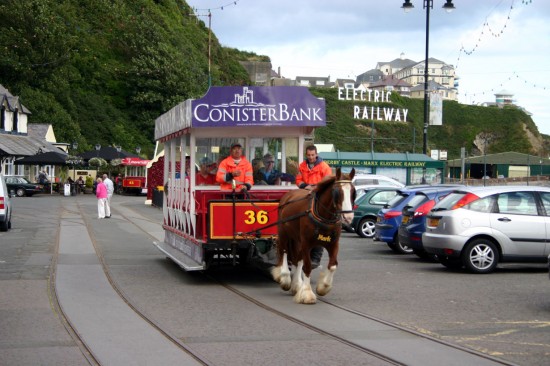 Sunday 13th September 2015 will mark the end of the 139th season of the Douglas Horse Tramway. This view shows Mark in charge of 36 on 11th August 2013. (Photograph by Gareth Prior)